Sunday’s opening round of the 2021 Penrite ProMX Championship at Wonthaggi was arguably the most anticipated motocross race in the better part of a decade and the new-look series served up all manners of storylines, surprises and disappointments. This edition of Q&A dives into what we learnt from an enthralling first hit-out. 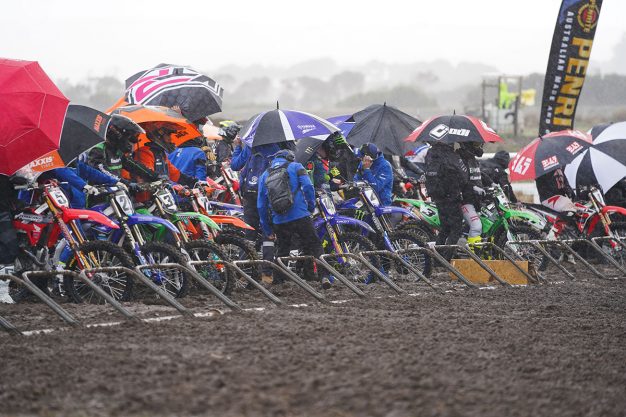 Q: Was the new Motorcycling Australia-led championship that different from what we’ve seen previously?

A: The answer is a resounding yes, although there were some familiarities on location. Full gates in most fields, new class formats, points structures, qualifying formats, timing systems and a quality broadcast package meant the championship opener felt like an essentially rebooted version of what we’ve seen in recent years. Considering the internet coverage at Wonthaggi is patchy at best and everyone on-site had to deal with gusty winds, intense bursts of rain and hail, the livestream – aired all day – and television went pretty smoothly by benefiting from its own connectivity. The TV coverage on Fox Sports and SBS only showed the second round of racing, but the professional commentary from Lee Hogan, Danny Ham and host Riana Crehan was well received across the board.

Q: What’s the official word on why Luke Clout’s bike failed in the second MX1 moto?

A: CDR Yamaha Monster Energy team owner Craig Dack has confirmed that it appeared to be an internal error on the team’s behalf that caused Clout to DNF the second race with a rare shock failure. While it hasn’t been confirmed specifically what the problem was, the issue seemed to start arising towards the end of the first moto when Clout surrendered the lead to a hard-charging Brett Metcalfe (Mongrel Boots Honda Racing), despite maintaining that he hadn’t been experiencing arm-pump or fatigue. While behind eventual winner Regan Duffy (KTM Racing Team) midway through the second moto, Clout’s shock had an issue and forced him to an early, disappointing retirement.

Q: Can Duffy carry this pace through the rest of the championship?

A: KTM Racing Team certainly struck a home run with the signing of Duffy to the MX1 class this year. On his debut outing in the pro ranks he topped qualifying, won the Top 10 Shootout, worked his way to third in the opening race, then hit another level on his way to winning the second moto and the overall. Sure, Wonthaggi is currently one of Duffy’s local tracks and he’s always been an exceptionally strong sand rider, but the 18-year-old races with a startling level of maturity and he’s certainly set the bar for the rest of the championship. With a string of hard-pack tracks now on the calendar, there’ll be many eyes watching for whether he can carry the same pace and aggression into the coming rounds. If so, the rest of the field will need to step up their game if they want to keep him in check.

Q: Should Todd Waters be worried at all?

A: Not really. While the defending champion didn’t dominate or ride on the level that a lot of people expected, it’s clear that Waters is looking at the big picture and was quick to point out afterwards that he started his successful 2019 season with a DNF. After qualifying sixth, Waters lost his rhythm in the opening race as he opened 2021 with a fourth-place result. He looked a lot more comfortable in the next MX1 moto on his way to second place and third overall. There’s a lot of racing to happen between now and Coolum, Waters knows better than most that solid points haul every weekend will set him in good stead for his title defence. 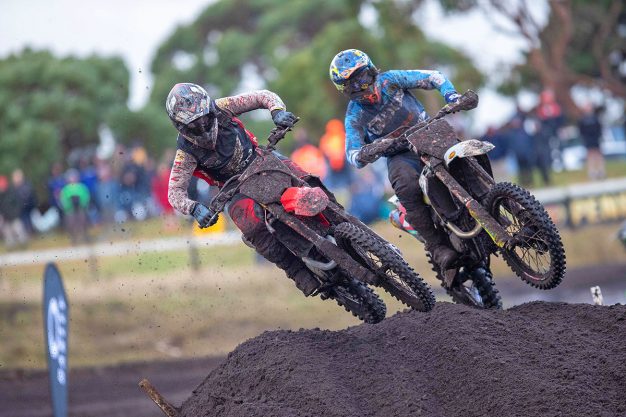 Q: What happened to Matt Moss?

A: The much-anticipated return of Matt Moss was dampened by a day that just didn’t go to plan for the former national champ. He battled clutch issues on his way to seventh in the Top 10 Shootout, then, experiencing the same mechanical problems in the opening race, high-sided before he could complete the first lap and landed hard on his shoulder. He’s had scans on his shoulder and has been cleared of any major injury, so expect him to be back on the starting gate at Canberra. Moss was very disappointed with the way his return panned out and has vowed to fight for every race win from here on out, now that he has nothing to lose.

A: For Delcon Civil Honda Racing’s Kyle Webster, Wonthaggi was a dream start to his MX2 campaign. Even before the gates dropped he was widely-tipped as a title favourite, based on his pre-season form and the fact that his main 2019 rival Wilson Todd has vacated the series to chase his MXGP dreams. Despite the fact that Wonthaggi is his home track and he’s done more laps around it than probably anyone else in the paddock, Webster was able to handle the pressure and the expectations that have been placed on his shoulders to punch out a perfect day – top qualifier, followed by 1-1 moto results. He’s carrying some imposing form and fitness into 2021 and all eyes will be on him at Canberra to see if he can carry on his winning ways.

Q: Who were the main surprises in the two main classes?

A: There were a few notable standouts across both fields. In MX1, it was inspiring to see a rejuvenated, healthy Brett Metcalfe (Mongrel Boots Honda Racing) hunt down to one of the championship favourites, Clout, to take a convincing opening race victory, then follow it up with an solid third in the second race to finish the day with second overall. In MX2, a brace of local racers, Jai Constantinou (Husqvarna) and MX2 rookie Alex Larwood (WBR Yamaha Bulk Nutrients) both finished in the top six for the day. Larwood impressed many with his raw speed and ability to make passes on a demanding track on his way to a 2-4 finish, while Constantinou started both motos strongly and more than held his own against the front-runners as he battled to 7-5 results. Both riders will take confidence into the rest of 2021, knowing they can take the fight to the factory guys.

Q: Who has the most homework to do before Canberra?

A: Former MX2 champion Jay Wilson has already acknowledged that his results at Wonthaggi were well below par and he has plenty of work do to before the gates drop again on 2 May at Canberra. The Yamalube Yamaha racer qualified a disappointing 13th in the MX2 class, then lodged 6-7 results over the two motos for seventh overall. Wilson’s starts were okay in both races, but he simply didn’t show the mongrel required to work his way forward through the field, and his results showed that. From a points perspective, both Clout and Moss have to make up ground in a hurry before the championship hunt gets out of reach at such an early stage. They’ll be keen to turn things around at round two and finish both races with maximum points.