Resurgent win for Roczen in Atlanta 2 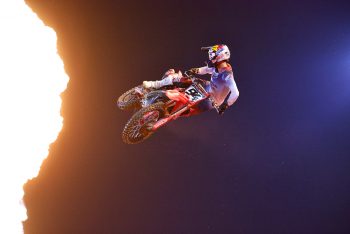 In the face of a must-win situation, Ken Roczen took a wire-to-wire Supercross victory, on a night where his main title rival finished outside of the top five, as Chase Sexton and Jason Anderson took podium finishes. In 250SX, Justin Cooper extended his advantage by winning over Hunter Lawrence and a gritty Cameron McAdoo.

It was an intense night of racing at Atlanta Motor Speedway for the final ‘Super Tuesday’ of the season, that eventually saw Roczen regain nine points on Cooper Webb in the championship standings.

After qualifying second, Roczen stormed to a heat race win, leading every lap, building momentum ahead of the 14th main event of the 2021 Monster Energy Supercross championship.

When the gate dropped on the final race of the evening, Roczen picked up right where he left off. The Team Honda HRC rider stretching out a five-second advantage over his teammate Chase Sexton early on, eventually securing victory by just under eight seconds.

Sexton secured his second consecutive podium, citing his performance Saturday as the boost of confidence he needed and later stating ‘second place was going to start to get old soon,” as he hopes for a victory before the end of the season.

A hard-charging Jason Anderson (Rockstar Energy Husqvarna) managed third place after a rough start. The New Mexico rider took the long route to the main via the LCQ after an incident with Alex Ray (Kawasaki) saw him hit the ground hard in the heat race.

Justin Barcia (TLD Red Bull GasGas) battled hard in a podium position at one point during the race, eventually settling into fourth place a good distance ahead of Saturday’s winner Eli Tomac who rounded out the top five.

Red Plate holder Cooper Webb (Red Bull KTM) found himself with his worst finish since the opening round as the checkered flag came out, ending the night in sixth place. Webb at one point was pressuring Barcia for fourth until a tip over saw him drop to sixth late in the race.

Seventh went to Webb’s teammate Marvin Musquin, who grabbed a heat race win on the night and put on a solid ride in the main. Aaron Plessinger (Monster Energy Star Racing Yamaha) who led much of Saturday’s race in Atlanta found himself buried after a first lap incident with his teammate Malcolm Stewart, he eventually went on to finish eighth.

Dean Wilson rebounded from his blunder on Saturday that saw him crash out of the LCQ to take ninth place on the night, as Joey Savatgy continued his great run of form with a 10th place finish.

The series now has just four races to go and it’s a 13-point gap from Webb to Roczen in the title fight. The riders will get back on track this Saturday for the third and final round of the residency at Atlanta Motor Speedway. 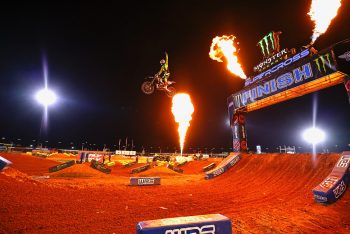 With the battle for the championship coming down to the wire, the leading duo grabbed heat race wins, setting up a showdown in the main event.

Off the line, Cooper found his way to the lead before the end of the first lap, with McAdoo further down the order in sixth place. After a few laps, McAdoo had a massive crash bringing out the red flag.

During the red-flag delay, McAdoo pleaded his case to be evaluated by the Alpinestars medical crew to clear him to race, the medics eventually sending him back to the starting line.

As the gate dropped on the restart, it was McAdoo with a miraculous run first to the corner, with Nate Thrasher (Monster Energy Star Racing Yamaha) ending up with the lead. Cooper made quick work of the duo though, getting back to the lead and taking off for the win.

Hunter Lawrence (Team Honda HRC) made a charge from deep in the top 10 to take second place, passing McAdoo who ran second until the latter stages of the race.

McAdoo’s heroic ride ended with a podium, taking third place and keeping himself in the title hunt. The podium didn’t come easy for him though, Thrasher making a late charge nearly passing him in the final section, the rookie taking fourth on the night.

Rounding out the top 10 was Jalek Swoll (Rockstar Energy Husqvarna) who worked his way into the top 10 late in the race. A tough night for Ryan Sipes ended with a trip to the Alpinestars medical unit following an LCQ crash that ended his night.

The series returns for the last of three races at Atlanta Motor Speedway this Saturday, with McAdoo now nine points back from Cooper in the championship standings. 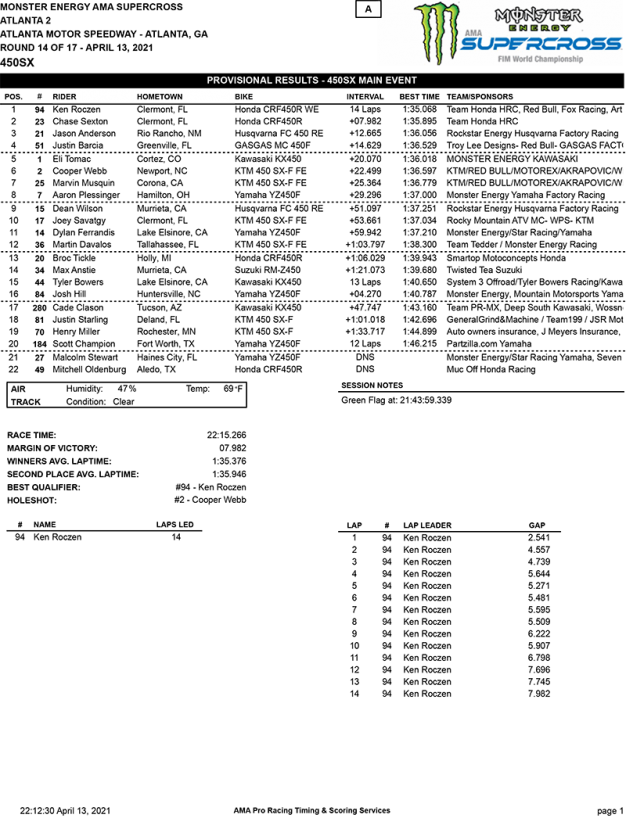