Assorted racer comments following the first round of the season.

In Quotebook, a selection of riders detail how their races played out at round one of the 2021 Penrite ProMX Championship, the first stop in a new era of the Australian Motocross Championship at Wonthaggi. Regan Duffy (KTM Racing Team) – First overall:
I couldn’t think of a better way to start the championship. To come away with the win from average starts and making my way through the field so quickly, I couldn’t ask for much more. I came into today as the under-dog, but I knew what I was capable of and I showed that today. The rest of the field know where I’m at now, but I’m not letting this round win get to my head – it’s a long season and I need to keep it going for seven more rounds.

Todd Waters (Husqvarna Racing Team) – Third overall:
It was an eventful day. I came prepared, but the lead-up was interesting as I have a two-week-old daughter and we drove down here in a motorhome with my family. As soon as the helmet goes on though, everything aside from racing falls away. In the opening race I got too excited, worked myself into third, but dropped it and then rode terribly and my technique went out the window. I regrouped after the race and came out with a better result in the second moto. I’m so happy to see Regan take his first victory and to have some young blood in the class, because it shows I have homework to do and it only spurs me along. When I won the championship in 2019 we left the opening round with a DNF, so this is a strong start and I’ve just got to keep putting it on the podium and enjoying it.

Jayden Rykers (Empire Kawasaki) – Seventh overall:
The day started off a little slow for me in qualifying, but I got an awesome start in that first moto, so that was good and from there it was still a challenge for me in selecting the best lines — I found it hard to piece the track together. Still, I finished seventh in that one, which was better, and moto two wasn’t too bad either. I had an early crash in that second race, fell back down to around 22nd and fought back to ninth, but went down again on the last lap and crossed the line 10th. It has been a long time since we last raced, so now we’ve had this experience I really look forward to getting to round two in a few weeks and making further progress there. We’ll keep moving forward!

Luke Clout (CDR Yamaha Monster Energy) – 10th overall:
I felt really good today and although Wonthaggi isn’t my my favourite track, as a team we had done our homework and I was in good shape coming into the weekend. The first moto was good although a little disappointing to not pull down the race win, but in the early stages of moto two, the rear end of the bike started to feel weird and become a little unpredictable. I tried to go on a best I could and got to lap seven, but it was dangerous and I wasn’t able to ride with any speed at all, so I pulled into the mechanics area and the boys said not to go back out. It’s a bitter pill to take, but the CDR Yamaha team are first class and they will be all over it and I’m sure the problem with be well and truly sorted before round two. I’m down some points, but I’m confident that I can get my way back into championship contention over the coming rounds.

Hayden Mellross (CDR Yamaha Monster Energy) – Fifth overall:
Today was okay as far as results go, but I have some work to do to get back on top of my game. Its been a long layoff for me so I was just focused on getting up to and through round one with no set- backs and we were able to do that. The next few tracks are ones to my liking and also the break between races also gives me time to work on some things moving forward. I can and will be better and will continue to work with the team to ensure we all get the best results possible.

Maximus Purvis (Bulk Nutrients WBR Yamaha) – Sixth overall:
There are a few things I need to work on but overall, it wasn’t a bad day and good to get the first race on the 450 under my belt. I had a quick transition from racing the 250 in NZ, to stepping on a 450 here, but with a few weeks before the next round, I will be better prepared and hoping to move forward. There are a lot of fast riders in the 450 class but racing with them can only benefit me as I learn the pace and intensity to be up the front and establish myself.

Brett Metcalfe (Mongrel Boots Honda Racing) – Second overall:
I knew from practice to qualifying that our bikes were competitive. The new Honda is amazing and I was super happy to deliver Honda the first win of the year. My Mongrel Boots Honda Racing CRF450R is working great, the team is working great, and it is a fantastic start to our season. I messed up race two by crashing but there are too many positives to take from the weekend for me to worry about that, onwards and upwards from here.

Connor Tierney (Floringsales Suzuki) – Seventh overall:
I felt great all day on my RM-Z450 and, after such a long layoff from national racing, it was great to finally be out there with the whole Flooringsales Suzuki team. The first turn crash in moto one wasn’t ideal, but luckily both the bike and I were able to continue and I kept charging all the way to the finish. In moto two I had the track figured out after making so many passes in the first race and I was pretty happy with the way I rode to finish sixth. Overall, it’s a great base for myself and the team after round one and I’m excited to head to Canberra in a few weeks time. 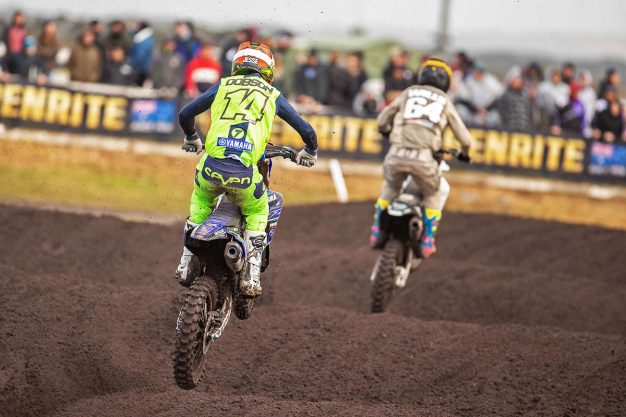 Nathan Crawford (Serco Yamaha) – Third overall:
I leave here pretty happy and satisfied to be honest. Six weeks ago I was devastated when I hurt my shoulder and it was a race against time to be on the start line here at Wonthaggi, but I did everything I could and was able to not just race but make it on the podium, so I’m stoked. The team did a great job and I only rode my race bike for the first time on Saturday but it was ready to go and we got it done. I think there is still some more strength to gain in my shoulder and with Canberra in three weeks, I expect to be at 100 percent by then and ready to take up the fight all the way to Coolum.

Jesse Dobson (Serco Yamaha) – Fourth overall:
Today was just about getting off to a good start with nothing crazy. This track can catch you out if you don’t give it the respect, so I was not going to ride over my head and risk something happening but rather just accumulate points and build a good base for the championship. My bike was working well and the team did a great job. I would love to have got on the podium, but we are right there and now it’s time to shift focus towards the next round and keep the momentum rolling.

Rhys Budd (Yamalube Yamaha Racing) – Fifth overall:
My goal coming into round one was to run top five for the day and we were able to achieve that on the weekend, so that’s a great start for me and one that I can take confidence from. I grew up riding a lot of hard packed tracks so riding sand doesn’t come naturally to me but its something I have worked at and to get a small reward today was good and something that I can take confidence from in the coming rounds. The next few tracks are more to my liking so its important I keep working hard and ensure I make the most of the coming rounds stay in championship contention.

Jay Wilson (Yamalube Yamaha Racing) – Seventh overall:
That’s not how I race. Those results aren’t acceptable, and they won’t happen again. I already have some things in place to be better at Canberra and looking at changing a few thing’s so I get back to where I belong. This result has only made me more determined to get things back on track.

Levi Rogers (Yamalube Yamaha Racing) – Ninth overall:
The first moto was pretty good as I was able to race with a lot of the fast guys and get to learn the pace required to be at the front of the MX2 field. Moto two I fell twice and then had to fight my way back to 12th but I need to clean up those little mistakes as when the field is this deep, every mistake can be costly. Still, I enjoyed the day and can take a lot from it. I wanted to be top eight and just missed that so I will keep working and tick that goal off in Canberra at round two.

Alex Larwood (Bulk Nutrients WBR Yamaha) – Second overall:
I wanted to get off to a good start and take advantage of round one being on a track that I’m familiar with. I put in a lot of work leading into the season and it was awesome to get a reward for myself and the team straight away and confirm that we are on the right track. Conditions today were tough with the track deep and the constant showers but I really enjoyed racing and battling with the MX2 guys. The top guys all have so much experience but its good to be in the battle with them and learn as I race. Thank you to everyone at the WBR Yamaha team and all our sponsors and let’s keep working hard for round two.

Kyle Webster (Delcon Civil Honda Racing) – First overall:
My Delcon Civil Honda Racing CRF250R powered me to first in qualifying and I felt comfortable straight away. I am so glad we got two wins today. I did not make it easy on myself in moto two as I dropped my bike near the halfway mark. Overall, it was a near perfect day, and I cannot thank the team and our sponsors enough. It’s been almost two year’s since we last raced a national and I am glad the championship is underway.

Noah Ferguson (GasGas) – 17th overall:
Round one was a tough one, but I’ve got it out of the way. Conditions today were really challenging, but it was the same for everyone — unfortunate crashes put me at the back of the pack and it was tough to work my way forward. I’m now looking forward to the rest of the series and putting my GASGAS MC 250F up on the box. Debuting the GASGAS in the MX2 class was awesome, though, and their involvement is only going to grow the sport.