Firm foundation set for Tierney to build further upon 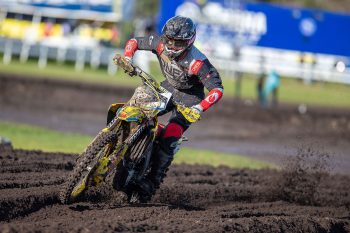 A promising ride to finish sixth in the second moto and P7 overall at Wonthaggi has set a firm foundation for Connor Tierney to build further upon as he looks to establish himself among the top riders in the premier class of Penrite ProMX.

Tierney recovered from a first turn incident in the opening MX1 moto to salvage 10th on Sunday and then powered to sixth in the second outing, handing him a well-earned seventh overall to open the series.

“We had a bit of a rough start in the first moto, ended up going down in the first turn, so was dead-last and got back to 10th,” Tierney told MotoOnline. “That was a positive swing, to come back there, and then in the second moto the start was better. The track was so gnarly – almost like trail-riding – and I had a big gap ahead, as well as behind. I just rode my own race to sixth.

“I’m positive with how things went at the first round, but now I’m super-excited to get to the next one and do it again. The aim is to try and get more support, but just having people behind me in the team helps so much, they love the sport and aren’t really getting any gain out of it, so to get them results and have a good day means a lot to us – I can’t complain at all.”

This year effectively marks Tierney’s third season on a 450, overcoming injuries and ongoing health troubles across the 2018 and 2019 seasons to eventually land his current opportunity with the Flooringsales Suzuki team.