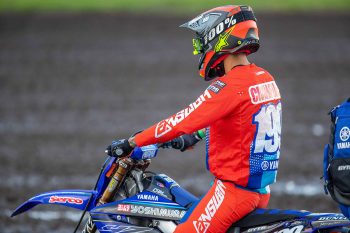 A broken shoulder-blade has been identified as the undisclosed pre-season injury of Nathan Crawford after he soldiered on to earn third in the 2021 Penrite ProMX opener at Wonthaggi.

Crawford remained tight-lipped in the lead-up to round one and, despite confirming he had spent considerable time sidelined, it’s only now that the Serco Yamaha rider has revealed his injury.

Upon return home to Australia from a year in the world championship, Crawford carded a 5-2 scorecard in tough conditions on Sunday and found himself on the MX2 overall podium at the end of round one. He had only returned to riding the week prior to the series commencement.

“I leave here pretty happy and satisfied, to be honest,” said Crawford. “Six weeks ago I was devastated when I hurt my shoulder and it was a race against time to be on the start-line here at Wonthaggi. I did everything I could and was able to not just race, but make it on the podium, so I’m stoked.

“The team did a great job and I only rode my race bike for the first time on Saturday, but it was ready to go and we got it done. I think there is still some more strength to gain in my shoulder and with Canberra in three weeks, I expect to be at 100 percent by then and ready to take up the fight all the way to Coolum.”

Crawford is tipped to be Honda Racing-mounted Wonthaggi winner Kyle Webster’s main threat in the race for the MX2 championship this season, each previously challenging for the MX2 crown and expected to transition into the premier class in the next season or two.