Overall winners Duffy and Webster recall opening round in Victoria.

With round one of the 2021 Penrite ProMX Championship run and won, it was Regan Duffy (KTM Racing Team) and Kyle Webster (Delcon Civil Honda Racing) who emerged as the winners at Wonthaggi in MX1 and MX2 respectively and MotoOnline tracked both riders down post-race for this Debrief interview. 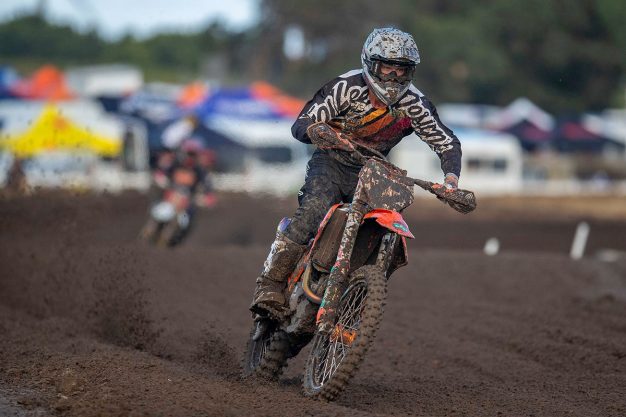 Congratulations on the win, a great way to start your career in MX1…

Yeah, I couldn’t think of a better way to start, to be honest, to do it like that with a terrible start and make my way through the field so quickly and then pull a massive gap, I couldn’t ask for much more. It was a solid day; I won qualifying, got the superpole win, unfortunately didn’t have the best moto one to finish third, but I was lucky to bounce back and win the second moto for the overall. I’m stoked!

You mentioned when I spoke to you before this round that the pre-season didn’t really indicate the type of form that you were in. You proved that today.

It was more-so the pre-season races that I did didn’t go quite so good, but that was okay, I came in the underdog, knew what I had and I showed it today. I think these boys know where I’m at now, but I’m not taking round one to my head at all, I know it’s a long season and I have to keep it going for nine more rounds.

Would you say this is the type of track that suits your style, with your background as a sand rider? Is Wonthaggi your element?

I always seem to do good in the mud, seem to be dominant in those conditions, to be honest. The sandy sort of conditions definitely suit me, but I don’t see a difference in sand or hard-pack and I enjoy both.

You were MXD champion in 2019, the last time that the nationals took place, so talk us through what it was like to pass the best guys in MX1 on your way to winning today. It must have been big for you?

Yeah, it was pretty awesome! I’ve said previously that I had these guys’ posters on my walls when I was a kid, so to be riding with them and especially passing them, it’s unbelievable.

What was the feeling, the emotion to cross the line in this second moto and get it done?

I just had my eyes on Todd [Waters] and Metty [Brett Metcalfe] the whole race, praying that Todd would stay second – I was going for him the whole moto [laughs]! I don’t know if I will be for the rest of the season, but that moto I was Todd’s biggest fan and hoping he would come out on top in that battle. Hats off to those guys, they rode solid all day and it was a really good day for me. A perfect result to win round one today, congratulations. You must be stoked with that!

Thanks, yeah it was an awesome day for us and a good way to start the championship for not racing in so long. I’m really happy with it and hopefully we can carry this into round two.

I know there were a lot of expectations coming into the season, you’re one of the title favourites obviously, but I’m sure even for yourself you’re curious to see where everybody’s at since you haven’t raced each-other in a full year at the national level.

Definitely. I mean, we do so much riding and practicing together, but you never really know where you’re at against everybody else. Luckily, we have a really good crew together at Beaton’s Pro Formula and all have our own race days every single day. So it was good and I’m happy with where we’re at. It’s been a solid pre-season and we will keep building from here.

I know you’re based nearby, so is this a track you get to spend a lot of time at with the Beaton’s guys?

Yeah [laughs], I live pretty close to here now and we do ride here a fair bit, but we ride a few other tracks as well. This is definitely a track that’s in our weekly schedule though.

What was the mindset for you, being out front and in those changeable conditions? That first moto saw a lot of rain partway though, but then the second one wasn’t so bad.

Honestly, it was just not to go too crazy because of the conditions. I just had to stay smooth, calm and when the rain came in the first moto it was pretty full-on, so it threw a spanner in the works. The second moto was good, I got out front early, tried to put in a few good laps and I actually made a little mistake, tipped over, but got up quickly and got back going. From there I stayed consistent and did what we had to.

First time out with the Honda Racing team, the factory program even though you were part of the team last year also. How was that for you?

It was nice to get back to the races with the whole team in that environment, it was awesome. Everybody had a ripper weekend, so it was really good, the other riders on the team rode really well and I couldn’t have asked for much more this weekend.