Only minor changes for Waters amid factory transfer 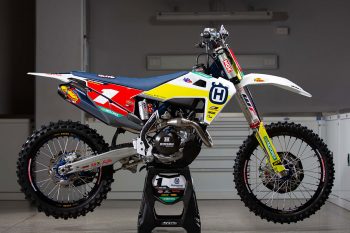 Husqvarna Racing Team’s 2021 launch has revealed that Australian MX1 champion Todd Waters will be met with only minor changes as he transfers into the in-house factory organisation for this season.

Waters, 30, had introduced his own motocross and off-road program last year only for competition to be cut short, however, he will maintain many of the partnerships formed one year ago.

After 2019 title-winning team DPH Motorsports collapsed, Waters was at the helm of his own factory-supported effort in 2020 before KTM Group instead opted to make all three of its factory teams – KTM, Husqvarna and GasGas – internal programs at Prestons for 2021.

For Waters, his structure won’t be vastly different regardless, continuing his partnerships with personal backers including Maxxis, ODI and MPE Suspension to provide a familiar platform on both his FC 450 and FE 450 race bikes this year.

“After having a break for over 12 months in terms of national events, I’m super-excited to get out there and go racing again,” Waters commented. “I’m comfortable with Husqvarna, am familiar with the bikes – both the FC 450 and FE 450 – and surroundings, so look forward to both the ProMX and AORC series in 2021.

“In motocross, to be able to defend the number one plate is the aim, but at the same time I will be going to do my best every race weekend as I always have done. Same with AORC, we got some experience there last year and to be a part of the official off-road program will be a good opportunity for me as well, so hopefully we can deliver the results to match and have a good year all-round.”

Waters didn’t get a chance to defend his crown in 2020 due to the series cancellation, however, a string of impressive state-based results have him in the box-seat to carry momentum into his upcoming campaign beginning this Sunday, 11 April, at Wonthaggi.

After trying his hand at AORC one year ago and immediately finding success by finishing third in the shortened series, Waters will once again pull double-duty in 2021 by adding off-road to his agenda alongside his ProMX intentions. The postponed AORC series will now commence on 17-18 April at Victoria’s Golden Beach.