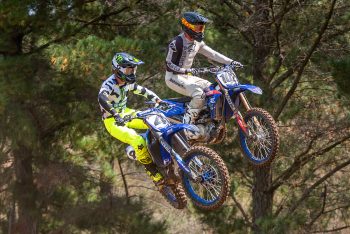 Clout, 26, was MX2 champion when Moss won the most recent of his premier class crowns in 2014, setting up a long-awaited showdown that’s been over five years in the works.

While Clout is maintaining a degree of respect for Moss, now aged 32, it’s evident that he has the desire to cement his status as Yamaha’s greatest hope to take home the Australian Motocross Championship in 2021.

“I think it’s good to have Mossy back – he was obviously the guy to beat and the champion before the incident that happened with him,” Clout told MotoOnline. “Having him back now, it gives us another guy to mix it up with and it makes us all want to train harder to win. More competition is also good.

A pending rivalry was elevated at Canberra’s first round of the East Coast MX Series last month when Moss dominated the opening moto and went on to capture the overall, but Clout was quick to point out this week that he managed to bounce back and defeat Moss by winning the final two motos.

“The East Coast round went good for me,” he reflected. “We started out a little bit slow, but won the last two races of the day and nearly the overall if it wasn’t for a red flag. I was using that race for testing and we made a lot of progress throughout the day with the team, which the last two motos showed when I won.

“A lot of people were taking about just how good Matt’s first race was… but I didn’t get a lot of credit for the last two. It doesn’t really matter to me though, the gates drop this weekend and that’s when all the bullshit stops.”

Not only will Clout have one eye on Moss, the current national number two will also re-engage in the battle with 2019 MX1 champion Todd Waters (Husqvarna Racing Team), who edged him to the title almost two years ago. With added experience in the US last year and a convincing pre-season, Clout is set to fight harder this time around.

“There’s been a lot of hype between myself and Matt, but you’ve got Todd, [Kirk] Gibbs, my teammate [Hayden Mellross], [Regan] Duffy and you know that everyone’s going to be really fast,” he said. “Todd’s got the number one plate and will come in confident, but I love racing against him. I’m just looking forward to getting behind the gate and seeing where we’re at.”