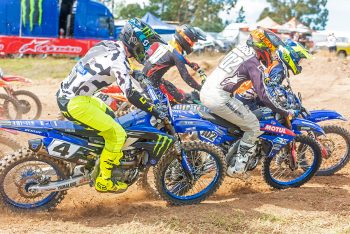 A unique Top 10 Shootout will debut at this Sunday’s Penrite ProMX opener to determine MX1 qualifying, backed by series presenting sponsor AMX Superstores with a $500 bonus on the line.

Rather than being a superpole-style contest over a single lap, the top 10 from regular qualifying will instead all complete an additional all-inclusive 10-minute session in a bid to set the quickest lap-time.

“All of us at AMX Superstores are race fans and motocross enthusiasts,” stated AMX Superstores business manager Rob Farrimond. “We feel privileged to be able to support initiatives with ProMX such as the Top 10 Shootout that will provide great excitement on the track and have race fans flocking trackside or watching on TV to see the incredible hot laps the MX1 riders will put down to win the shootout.”

Motorcycling Australia (MA) CEO Peter Doyle added: “Initiatives such as the MX1 Top 10 Shootout Award will keep race fans on the edge of their seats and ensures that the elite riders in MX1 are on track as much as possible.

“Having the chance to view your favourite MX1 rider on track on a hot lap is a very unique opportunity in motorsport and it is fantastic that AMX Superstores have supported the MX1 Top 10 Shootout Award, allowing the fans to witness electrifying on-track speed to kick start the action at every round of the series.”