Having crossed the pits to Honda Racing for 2021, former Australian MX1 champion Kirk Gibbs has fired a warning shot across the bows of his rivals with his pre-season form. MotoOnline asked him Five Questions about his preparation so far, just weeks out from the Penrite ProMX opener at Wonthaggi. 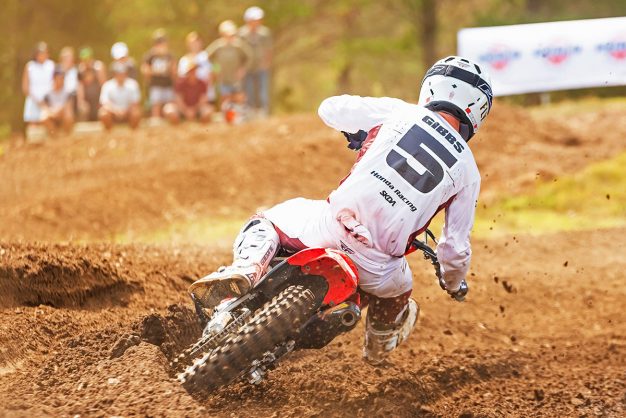 How are you feeling after the pre-season races?

Overall, I’m feeling pretty good about how it’s gone. I’m on a brand new bike this year and while it’s an awesome machine, it’s been reasonably tough to get parts that we need for it. When you throw in the disruptions of supply from covid, it’s made it harder again. We’re getting there and we’re definitely on the right track – I’d say the bike is 90-95 percent ready and I don’t think I’ve ever felt fitter or more ready than I do right now. That’s important this year, as there are a lot of good guys in the MX1 class and it’s really important to come away from the first round with a good result.

Have you finished pre-season testing?

We’ve basically been tested from the day I picked up the new CRF450R until now! It’s my first year with the new team and it’s been a big change for me. Two years ago I had a big change after a long time with another team, but I feel like I’ve really gelled with the Honda. It’s more natural to me from where I’d originally come from – the bike feels smaller and skinnier and has great power and a hydraulic clutch, so I feel really good on it. I feel like the suspension package is getting really close and we’re fine-tuning the engine parts. We’re finicky and want to get the package absolutely perfect before the season starts and I’m confident we’ll be ready to go for round one.

What are your expectations for ProMX?

It might take a couple of years to really turn things around, but I think having Motorcycling Australia (MA) as the promoters will be a big positive in the long run. TV’s a big thing and they’re making a lot of steps in the right direction – Peter Doyle and the small crew have all been around for a long time and should know how to get people to the track and create good atmosphere. When I first stepped up to the seniors in the mid-2000s I had to park on the other side of the Coolum track as there was no space left – it was normal to have 5000-6000 people coming to watch the racing, but I’ve noticed it gradually die off over my professional career and I’d love to see the sport return to the level it used to be at. Who do you think is going to bring the heat this year in both the MX1 and MX2 classes?

In MX2 I think my Honda Racing team-mate, Kyle Webster, is probably the favourite. I’ve been riding a lot with him, and he’s in a really good place physically and mentally. I also train and ride with Jesse Dobson and I’ve been impressed with him during the pre-season, but with Nathan Crawford, Jay Wilson and others, I think we’ll see some good battles in that class. It’d be nice if I dominated MX1… but Todd Waters has the number one place for a reason – he’ll have a lot of confidence and will be a tough one. The CDR guys will be good, Matt Moss is flexing at the moment and there are a bunch of young guys, like Regan Duffy, who could be strong. There are seven or eight guys who can win races, including myself, and it’ll come down to who stays consistent for the entire season.

Where are you focusing your efforts or looking to improve before Wonthaggi?

My starts have let me down a bit during the pre-season races, so I’m concentrating on those, and just trying to get that last 5-10 percent out of the bike. If we can get our heads around those elements, I think were going to be in a great position. Everything is close to being ready so that we come out of the gate firing. I’ve had mixed results at Wonthaggi in the past – if I get into a good rhythm I do well, but if I don’t it can be a struggle. Starts are pretty important there, and we’ll be making an effort to get out front early, as everyone will be super-fast.