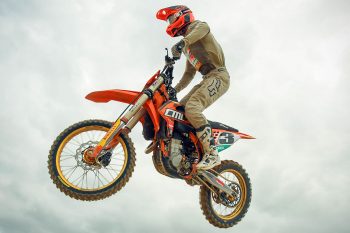 Harwood wrapped up the premier class series after winning the opening three rounds and then doing what he had to do at round four where he finished in second overall despite sustaining wheel damage in the opening moto.

Former multiple-time champion Cody Cooper (Honda) swept the final round for the overall victory, however, Harwood held onto the title with his runner-up result. Completing the podium at Taupo was Kayne Lamont (Altherm JCR Yamaha), while in the series it was Wyatt Chase (Yamaha) who finished in P3.

“I’d done all the hard work before we got to Taupo, really,” Harwood reflected. “I was just managing it from there, taking it race by race. The goal here at Taupo was just to get three good starts and finish the races. That’s all I really needed to do, although there was a scary moment in that first race when I got taken down – I was lucky to finish that race.

“I wasn’t pushing it or even going particularly fast today. I didn’t want to get in a fight and tangle with Cody… I was cruising in the end. I’ll be back to defend the title next year, the bike was fantastic and it was just up to me to put it where I needed it to go.”

In the MX2 series there was no denying Purvis, standing atop the podium in all four rounds to be crowned champion over James Scott (Honda) and Hayden Smith (GasGas). The final round saw Purvis win ahead of moto three winner Scott and Josiah Natzke (Kawasaki).