Collarbone repair has Wills in race to make ProMX opener 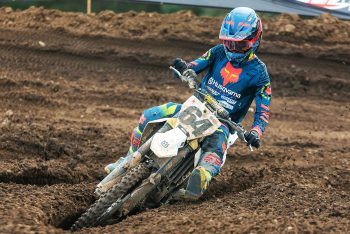 Dylan Wills is in a race to make it back on the bike in time for Wonthaggi’s opening round of the 2021 Penrite ProMX Championship after breaking his collarbone in Queensland last weekend, before having it repaired this week.

Wills is set to enter the MX2 class with factory support from Husqvarna and a newly-formed partnership with Raceline, however, the 25-year-old has had to undergo surgery and have his right collarbone plated on Wednesday.

The injury happened at Kingaroy’s second round of the Sunshine State MX Series, where he finished fourth in the opening MX2 encounter before crashing out of contention in moto two. It’s an untimely injury after what has been a solid lead-up to the ProMX season, scheduled to commence on 11 April in Victoria.

“We’ll see how we go if I can make Wonthaggi or not,” Wills told MotoOnline. “I had surgery yesterday and am on the road to recovery already, but I don’t know if I’ll be ready. Round one could definitely be possible, I just have to see how I feel when the time comes and make the smart decision then. Everything went well with the surgery, as good as it can be at this stage.”

Wills has signed with Husqvarna Motorcycles for this season, putting together his own program for the outdoors prior to stepping into the factory SX1 team when the Australian Supercross Championship takes off in the latter stages of the year.