Clean-sweep of Arlington completed by Webb 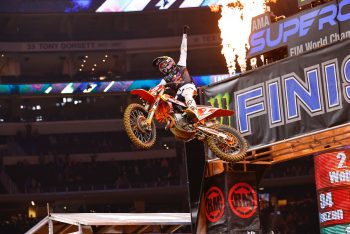 Cooper Webb went toe-to-toe with his title rivals in the third and final round of the Arlington residency, taking the win and making it three Monster Energy Supercross wins in a row, as Justin Cooper won again in 250SX West.

After a heat race he’d like to forget, that saw him passed by title rival Ken Roczen (Team Honda HRC), with Roczen’s teammate Chase Sexton later putting him on the ground, Webb dug deep when it came time for the main event, catching and passing Roczen to take the main event win.

At the beginning, Roczen took the holeshot and got out to a comfortable lead, with Webb, Eli Tomac (Monster Energy Kawasaki), and Justin Barcia (TLD Red Bull GasGas) in tow. As the race reached the halfway point, Tomac applied pressure on Webb and the duo caught Roczen out front with six minutes to go.

The title contenders swapped positions for nearly a lap, Webb eventually come out on top and stretched out a lead of over two seconds. As the race dwindled down to two laps, Roczen began to reel in Webb but it was too little too late Webb crossing the finish line just over one second ahead of him.

Tomac finished third but not without issue, a mistake in the finish line section put him in a battle with Barcia who eventually finished fourth on the night.

After a solid afternoon qualifying performance, Jason Anderson finished fifth on the night with Malcolm Stewart (Monster Energy Star Racing Yamaha) putting in a great ride for sixth just behind him.

Stewart’s teammate Dylan Ferrandis returned to the top 10 notching seventh on the night. Ferrandis was followed by Savatgy who continues to have solid pace in the back half of the season.

It was an unfortunate evening for Marvin Musquin (Red Bull KTM) and Chase Sexton (Team Honda HRC) who both crashed hard ending their nights early. 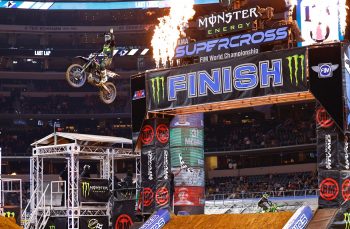 After three races off the podium and his worst finish of the season, Justin Cooper put his Monster Energy Star Racing Yamaha atop the box at Arlington 3 to regain control of the championship lead.

Cooper took the holeshot of the 250SX West main event and never looked back, eventually taking the win by 3.5s in dominant fashion.

Cooper was flanked throughout most of the race by title rival Cameron McAdoo and his Monster Energy Pro Circuit Kawasaki. McAdoo got a great start but was not able to match the pace of Cooper out front.

The final spot on the podium went to McAdoo’s teammate Seth Hammaker, taking the second podium of his career. The young rookie capitalized on a mistake by Hunter Lawrence (Team Honda HRC) late in the race that saw Lawrence go into the safety net after over jumping at the end of a rhythm lane. He’d remount to finish fifth on the night.

Jalek Swoll (Rockstar Energy Husqvarna) continued his momentum from a podium on Tuesday to take fourth place on the night, after recovering from a rough start. Sixth place went to Garrett Marchbanks (ClubMX Yamaha) who was near the front early on, running as high as fourth before a mistake dropped him outside of the top 10.

Seventh place went to Chris Blose who continues to impress on his privateer GasGas this season, followed by Phoenix Honda’s Kyle Peters in eighth.

It was a great night for Monster Energy Star Racing Yamaha’s rookie duo with Nate Thrasher taking ninth and Jarrett Frye rounding out the top 10 with impressive rides.

It was an unfortunate night for Jordon Smith, the Monster Energy Kawasaki rider getting collected in a first lap pile-up during his heat race, ending his night early with suspected elbow and shoulder injuries.

In the 2021 Monster Energy Supercross standings, it’s now Cooper with the lead over McAdoo who sits two points back, with Lawrence six points back in third overall. The series now takes a two-week break before returning to action in Atlanta on 10 April. 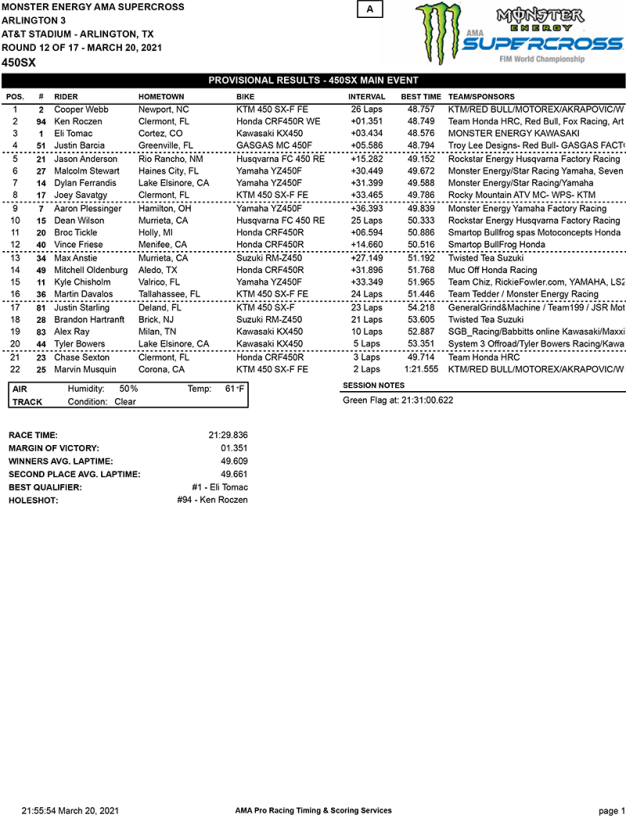 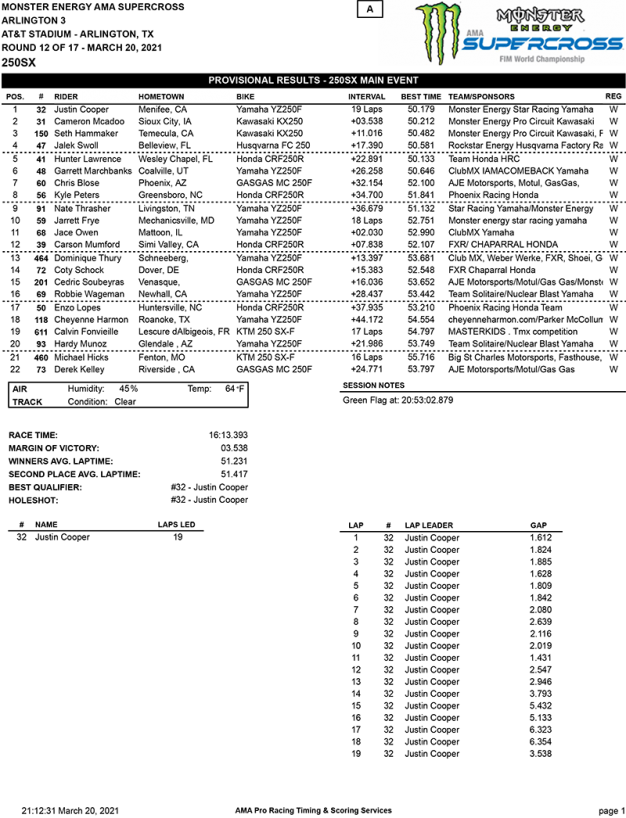