Former champion speaks about returning to racing after four-year absence.

After four years away from the sport, former multi-time champion Matt Moss has returned hungrier than ever and ready to prove the doubters wrong in 2021. Riding as a true privateer this season, the 32-year-old won the overall at the opening round of the East Coast MX Series in Canberra last weekend, beating a handful of factory riders in the process. MotoOnline had a Conversation with Moss afterwards to find out more about his long-awaited return to the upcoming Penrite ProMX Championship. Mossy, congrats on taking the win at ACT on Saturday. How did it feel to be back on top of the podium, especially against a quality field?

After doing a few club days and the Coffs Harbour Stadium MX, I knew I had work to do and what I needed to work on, but I went into Saturday knowing I’d win and I had it in my head that no-one would get in my way even though Jake [Moss] and I are out the back of the pits with a ute and trailer, changing my clutch after practice to get through the day, racing against big-budget teams with mechanics and trucks. In the first race I absolutely hosed everyone and I rode like I wanted to do that. In the second race, I got a good start and had a good battle with Luke Clout. He took me off my game and we battled and passed each other five or six times, which allowed Kirk Gibbs to get by as we played cat-and-mouse… I eventually had enough and gave Clouty a shunt off the track and finished second. The third race, it was red-flagged with an injured rider. I got a good start, but still feel I probably could’ve won that one as my fitness was fine and I was hitting my marks. I finished that moto in second to Clouty, then in the final race I finished fourth, but all up I was pumped on the weekend and, heading into the ProMX Championship, it was an important one, for sure. If I was one of the race team owners, I’d be a bit embarrassed that a privateer beat us after four years off.

Have you found the pace of the MX1 class has increased since 2016?

I feel like they’ve had four years to get faster, but they haven’t really. Don’t get me wrong, I’m a quick adapter and speed really wasn’t going to be the issue for me – I know how to turn the throttle on when the others do – but I think the aggression side of it has increased. Even though I nearly holeshot every race on a bike I’ve only had for five weeks, I was very surprised at the horsepower of the CDR bikes. My Factory Spec suspension is unbelievable, though – we don’t have any race budget, but the biggest priority was to get the bike handling well.

So what’s driving this comeback? Is it anger? Revenge? Wanting to prove people wrong?

All of that stuff is a factor. I love proving people wrong, especially when they’re high-up people who told me I was an idiot for trying to return and there was no way I was going to get a ride. I love the sport, but I feel it’s in a shit spot and it’s not moving forward – I want to change that for the kids coming through. At the moment there’s no path for them and teams tend to select racers they like, rather than for their talent. That needs to change and I want to shake that up. Like, I contacted every factory team and said ‘look I don’t want any money, bonuses, etc, if you provide a bike, I’ll do the rest’. They all said no and some didn’t even reply to me. I appreciate that they’d signed their riders and there are question-marks over me, but that’s why it’s important to me to prove them wrong.

You were planning your comeback for last year, but that didn’t happen because the championship was cancelled. How frustrating was it to have to wait another year?

It’s not like I was training hard-out for four years. I was over it and done with racing – I ate McDonald’s, drank Coke and smoked ciggies… It wasn’t until a year out that I thought ‘yep, I want to do this again’. I stopped thinking about being an excavator driver and started thinking about being a champion again. I started getting ready for the MX Nationals opener at Conondale last August, but when that was cancelled I went back to work, sent the bike back to my brother, Jake, and worked up until Christmas eve. From new year’s day I’ve been training my arse off, doing motos, and feeling mentally better than I ever have. My fitness still has a bit to go, but mentally I couldn’t be stronger. 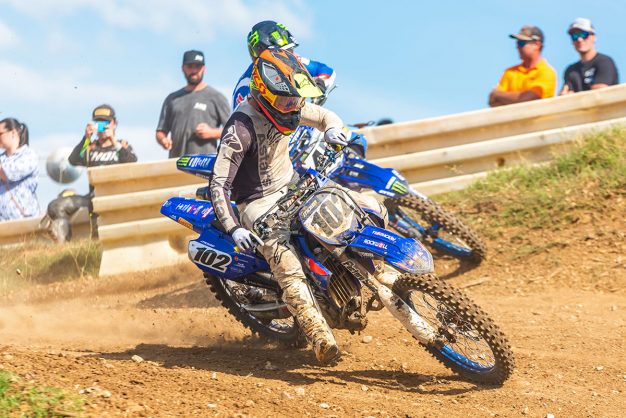 From this chat your desire to win the title again is pretty obvious. How would you describe that hunger?

The other guys have no idea how badly I want it. If someone told me I’d have to get shot 20 times in the stomach to win the championship, I’d take the 20 shots, 100 percent. I’ve never been this happy and excited to go racing, and I’ve always ridden well when I’m in a good mindset like this. To be honest, though, if I win the championship this year, I’ll probably quit. I’m saying that as I want to spend time with my kids and it sucks being apart from them. My vision for what I want to do and achieve in the coming years has changed now – I love racing and, long term, I want to remain involved in the sport, help change and grow it.

Since you last raced you’ve got a family to support now. Has having kids changed your focus or how you view racing?

To a degree it has. I want my kids to have the same opportunities I’ve had, if not more. My son loves his bikes and wants to race, but I actually don’t want him to, mainly because of the social side of things. I’m very awkward socially and don’t have many friends from school, so that’s one of the sacrifices I made to get to this level. I don’t know if I want that for my kids and I definitely don’t want people in power ever telling them that they’re idiots and that they’ll never win or make it.

What sort of feedback have you had from people at the races about your return?

Ninety-nine percent of people are so positive and supportive, which is awesome. You’ll always get one dickhead who thinks they know you or doesn’t like you and says some things, but I feel like I’ve got more support than any of the other riders. A lot of people who used to be dirty on me have seen how I’ve changed and am turning things around, they really want me to succeed.

You mentioned at the start of our chat that your twin brother Jake is racing again as well. Are you guys riding for the same ‘team’, so to speak?

Yep, our team has been chucked together with two stock bikes each. Jake’s a more talented rider than me, but needs a bit of a mental kick – his lap-times are right up there but he’s missing a bit of belief in himself. We plan to announce our team sponsors pretty soon, but it really is a full privateer deal like we’re junior kids going racing again. It’s a bit of a rodeo at the moment and it’s a fun ride.