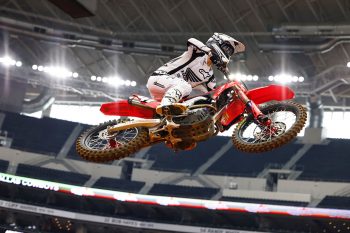 Australian Hunter Lawrence has become the fourth different winner in four races of 250SX West this season, piecing together a dominant performance in 2021 Monster Energy Supercross at Arlington 2.

In only his sixth Supercross start, the Team Honda HRC rider delivered on his longstanding promise and has risen into championship contention on a night where the title favourites faltered.

After one lap it was Harrison who led from Swoll, Peters, Lawrence, Jordon Smith (Monster Energy Pro Circuit Kawasaki) and McAdoo in the top six. Hammaker went down with just over 11 minutes to go, dropping back to 15th place, and around that time Cooper had worked his way up to 12th. Lawrence began to pick his way through at the front, passing Peters and catching the leaders quickly after. Just behind him, McAdoo had worked his way through into the top five and began to pressure the Australian.

Swoll got into the side of Harrison for the lead and in the following corner, Lawrence passed the duo in one move, taking the lead. As McAdoo tried to pass Swoll and Harrison through the whoops he crashed hard, dropping to 11th just behind title-rival Cooper. With eight minutes remaining, Lawrence had worked his way to a three-second lead over Swoll and Harrison, followed by Peters and Marchbanks in the top five.

Rookie Nate Thrasher (Monster Energy Star Racing Yamaha) then began to pressure Smith for sixth as Peters made the pass for third at the front. As the clock hit five minutes, Cooper and McAdoo began to work their way into the top 10, taking over seventh and ninth respectively, as Hammaker remained deeper in the pack in 14th place, unable to climb forward.

ClubMX Yamaha’s Garrett Marchbanks made his way past Harrison for fourth as Cooper caught Smith for sixth and closed on Harrison, quickly making the pass for fifth. Out front on the final lap, Lawrence cruised to victory by nearly five seconds to take his first win in just his sixth-career Supercross start. Second-place was Swoll, who took the first podium of his career, with Peters behind him taking the third podium of his career.

Fourth was a solid result for Marchbanks, with Cooper recovering to round out the top five. Behind him, Harrison took the best finish of his season in sixth with McAdoo passing his teammate in the closing stages for seventh. Smith claimed eighth, Blose ninth and Thrasher earned his second top 10 in as many races. Hammaker recovered to 11th and it’s worth a mention that Stilez Robertson (Rockstar Energy Husqvarna) didn’t start the race due to injury.

It was deemed post-race that McAdoo’s re-entry after crashing in the whoops was illegal and he was docked three positions by race officials to P10, meaning Lawrence now has the points-lead and red plate by one point over McAdoo, with Cooper only one point further back. Monster Energy Supercross will continue this Saturday, 20 March, for the third-consecutive race at AT&T Stadium and marking round 12 of the 2021 season. 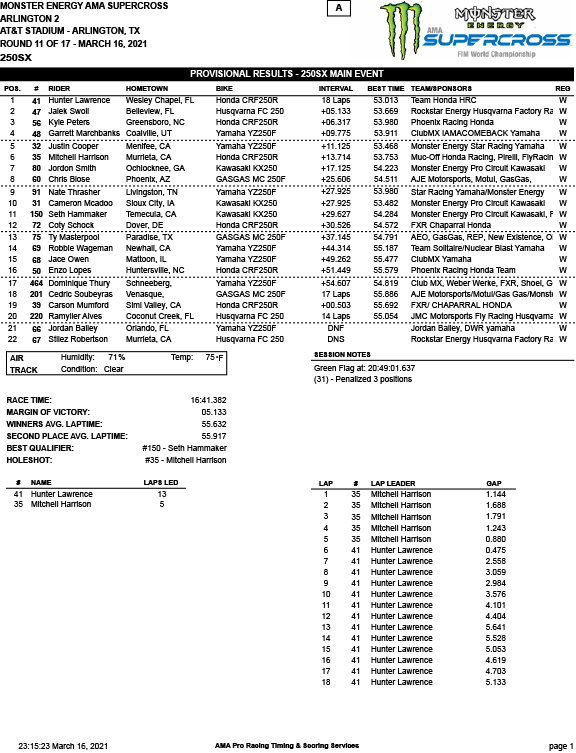