Another critical victory from points-leader Webb at Arlington 2 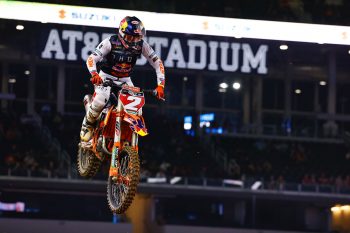 Monster Energy Supercross red plate-holder Cooper Webb extended his advantage with a composed victory at Arlington 2 tonight, further assuming control of the 2021 championship with his fifth win of the year.

It was Roczen who grabbed the jump, but Webb came through to take the holeshot. After a half of a lap it was Webb, Tomac, Roczen, Chase Sexton (Team Honda HRC) and Martin Davalos (Monster Energy Team Tedder KTM) in the top-five. Buried in the pack was Justin Barcia (TLD Red Bull GasGas) in 16th, with Jason Anderson (Rockstar Energy Husqvarna) dead-last after the first lap.

The top four began to break away, with Webb getting a bit of an advantage at the front, while Roczen started pressuring Tomac for second. Monster Energy Star Racing Yamaha’s Aaron Plessinger then ran it in on Vince Friese (Smartop Bullfrog Spas MCR Honda) for seventh-place, putting Friese on the ground and subsequently collecting Friese’s teammate Tickle in the process.

Barcia’s charge through the pack saw him in eighth at the 15-minute mark, while at that same time, Tomac began to pressure Webb, with Roczen dropping off about a second back of the two. Plessinger and Barcia caught Davalos, who was running fifth, with Plessinger getting by with 10 minutes to go and Barcia coming by a section later.

Out front at the halfway point, Webb continued to lead with just under a second advantage over Webb. Three seconds back from Webb was Roczen in third, who had a 10-second advantage over teammate Sexton. A few laps later, Barcia made an aggressive, but clean, block pass on Plessinger for P5 and set his sights on Sexton for fourth. Meanwhile, Anderson had worked his way into the top 10 with five minutes to go, recovering from his dismal start.

Out front, Tomac put pressure on Webb before making a mistake in the whoops and giving Webb around a two-second lead, with the duo just four seconds ahead of Roczen in third. Webb’s consistent pace paid off in the closing stages, stretching out a five-second lead heading into the final lap and going on to take the chequered flag. Tomac took second, with Roczen securing his first podium in four races.

Fourth went to Barcia and Sexton picked up another top-five finish, as Anderson salvaged a sixth-place finish, with Plessinger notching another top 10 behind him in seventh. A battered and bruised Ferrandis gutted out an eighth-place finish after missing most of the second qualifying practice with a crash, while Davalos grabbed ninth for his first top 10 of the year. Tenth went to Dean Wilson (Rockstar Energy Husqvarna) after working his way through the LCQ to get into the main event.

Post-race it was revealed in the results that Anderson would be docked as a result of powering hard on the throttle alongside the whoop section after avoiding MCR teammates Friese and Tickle in their incident early on. That demoted the 2018 champion to P7.

Monster Energy Supercross will continue this Saturday, 20 March, for the third-consecutive race at AT&T Stadium in Arlington, Texas, and marking round 12 of the 2021 season. 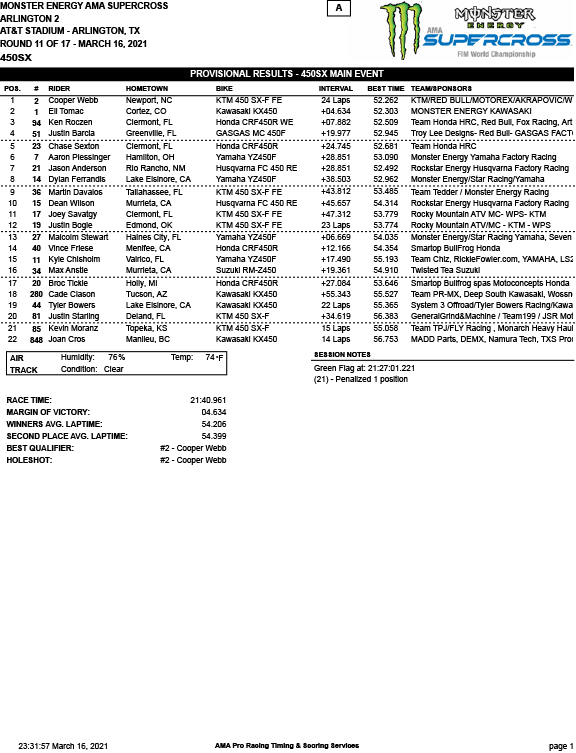