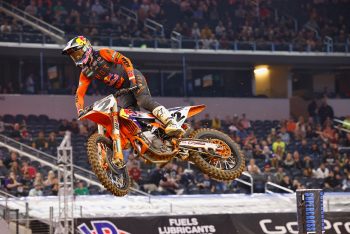 Red Bull KTM’s Cooper Webb led every lap of the 450SX main event en route to victory and grabbed the points lead in the first of three Monster Energy Supercross races in Arlington, while in 250SX West it was Seth Hammaker who took his first-career win over Hunter Lawrence in his maiden podium.

After coming into the first turn in second place, Webb wasted no time getting to the front, jumping out over a one-second lead in the first lap of the race and never looking back. He went on to take his fourth victory of the season by over four seconds, marking his third win in the last four races.

Justin Barcia put on a few charges to reel Webb in, closing the gap to under two seconds at one point. The TLD Red Bull GasGas rider spent most of the race in second place and would go on to finish there and take his fourth podium of the year.

Continuing to build on positive results in the back half of the season, Jason Anderson (Rockstar Energy Husqvarna) took his first podium of the season. The 2018 450SX champion worked his way through the pack, making aggressive passes that were at one point called into question by the AMA. As of now, no penalties have been handed down.

Aaron Plessinger (Monster Energy Star Racing Yamaha) continued his surge of success following his Daytona podium, dominating his heat race and eventually finishing fifth in the main event. He heads into round 11 sitting fifth in the championship standings.

Ken Roczen (Team Honda HRC) finished the night in sixth, his troubles starting early in the heat race resulting in a bad gate pick for the main event. A mid-pack start in the main event created an uphill battle for the red-plate holder and while he charged to finish sixth, he now trails Webb by seven points in the standings.

Joey Savatgy (Rocky Mountain ATV/MC KTM) took his best result of the season in seventh, holding off last week’s winner Eli Tomac (Monster Energy Kawasaki) who would finish eighth after starting well outside of the top 10.

Rockstar Energy Husqvarna’s Dean Wilson had a solid start to the Arlington residency, qualifying inside the top 10 and eventually finishing ninth on the night. He was followed to the finish by Martin Davalos (Team Tedder KTM) who took his first top 10 of the season. 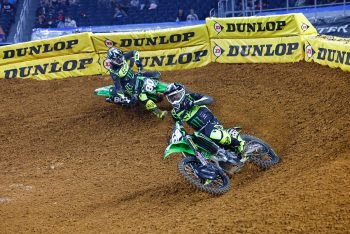 After an up and down start to the season, Monster Energy Pro Circuit’s rookie standout capitalized on a great start to notch a breakout win in just the fourth main event of his young career.

The 20-year-old grabbed the holeshot and never looked back. He was pressured late in the race by eventual second-place finisher Lawrence who grabbed the first podium of his career aboard his Team Honda HRC machine.

Points leader Cameron Mcadoo and championship rival Justin Cooper were eighth and ninth in the opening lap, the duo eventually made their into third and fourth late in the race. Swapping positions in the closing laps, Cooper attempted a pass with a few corners to go, sliding out and giving the final spot on the podium to McAdoo. Cooper remounted to finish fourth.

Garrett Marchbanks charged hard after a dismal start to finish fifth aboard his ClubMX Yamaha, he battled in the closing stages with Alex Martin who eventually fell down the order and out of the top ten.

Jalek Swoll was up front early riding in the top five for much of the opening stages. The Rockstar Energy Husqvarna rider would eventually finish in sixth just ahead of his teammate Stilez Robertson in seventh.

Muc-Off Honda’s Mitchell Harrison recovered to take eighth, after being forced to qualify through the LCQ. The final two spots inside the top ten went to Chris Blose in ninth and rookie Nate Thrasher taking the first top 10 of his career.

McAdoo maintains the points lead over Cooper by six points as the series prepares looks ahead to round 11 this Tuesday, the second of three rounds inside AT&T Stadium in Arlington. 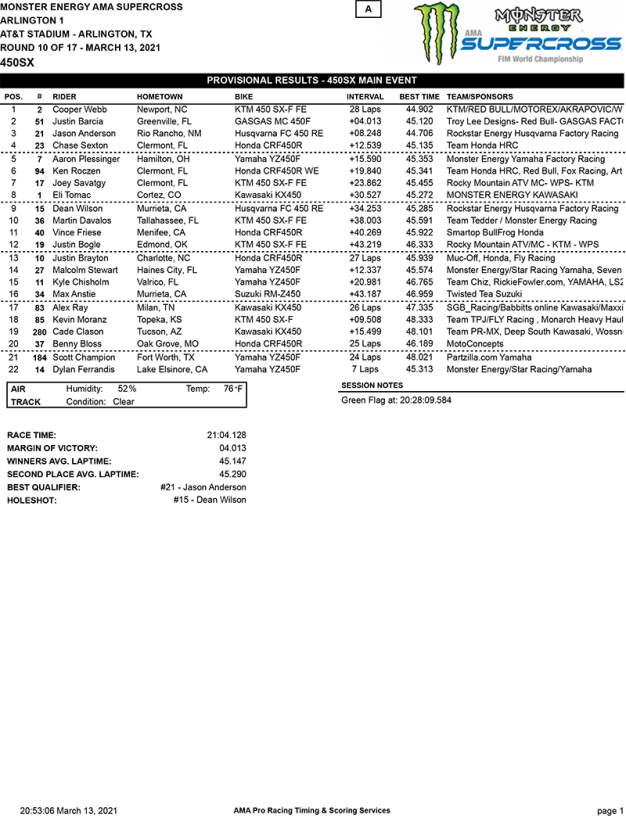 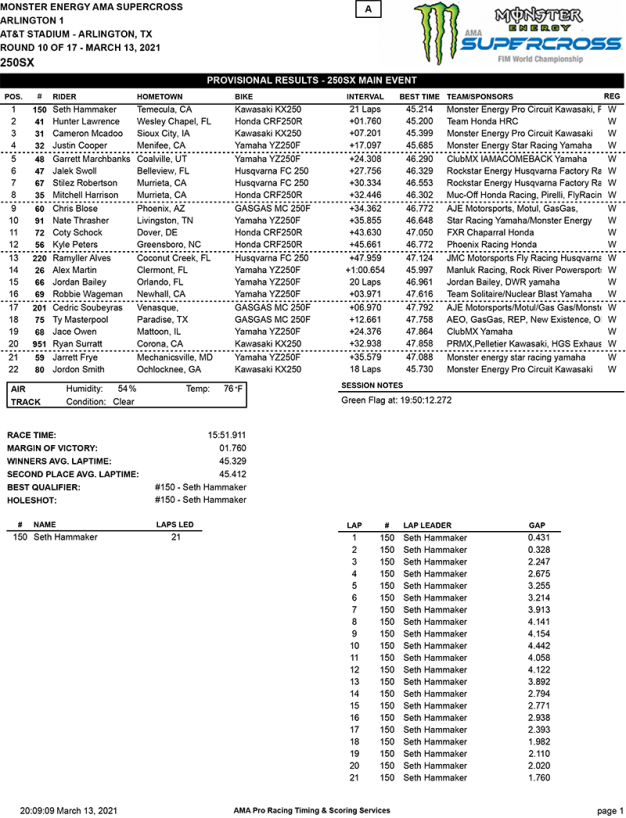