Ownership structure revised and a new MX2 rider to be announced. 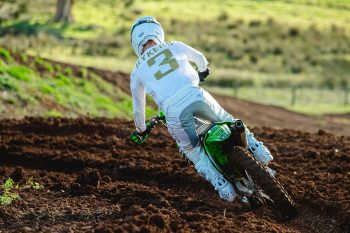 Western Australian Jayden Rykers has been re-signed by the new-look Empire Motorsports Kawasaki program for the 2021 Penrite ProMX Championship, continuing their partnership that was initially due to begin in last year’s cancelled season.

Empire Kawasaki is now under a new ownership structure solely led by ongoing team manager Tyson Cherry following the departure of Clint Hellier, however, Rykers will continue to lead the program on-board the factory-supported KX450.

“My training has been good in the lead up to the opening round,” Rykers commented. “I got going earlier than normal; after a full season off the bike I wanted to make sure I gave myself plenty of time to build and not rush the process.

“I’m loving the 2021 KX450. It is such a rideable bike, from the way it handles, to the power delivery, it’s a good package to be working with. I’m looking forward to getting back to racing – that is what I have missed the most.”

Rykers emerged as a revelation of sorts in his rookie MX1 campaign during 2019 largely as a privateer, challenging for a top-five ranking in the series prior to being injured an ruled out at Moree’s eighth round. He wound up 10th in points, highlighted by fourth overall at Murray Bridge after finishing on the podium in the opening moto.

It’s also expected that Empire Motorsports Kawasaki will sign a new MX2 rider to enter the new KX250 in ProMX when the gates drop at Wonthaggi on 11 April. It was Deakin Hellier – son of former team owner Clint Hellier – who had been set to ride MX2 last year, but it is understood that he will take a year out of the sport in 2021.

“We’re very excited to see the start of the 2021 ProMX series get going,” stated Robert Walker, Kawasaki Motors Australia national sales and marketing manager. “With a new KX250 and KX450 for this year we’re very confident of some great results. Our team manager Tyson Cherry has done a great job over the last couple of years and will be working closely with his team.”