First heat win an injection of confidence for Lawrence 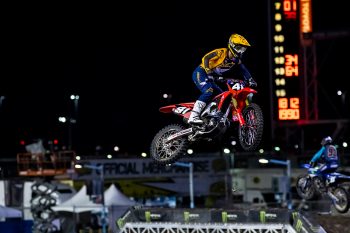 As he continues to build strength in his return from injury, Hunter Lawrence boosted his confidence by grabbing his first heat race win in Monster Energy Supercross on Saturday in Daytona.

Team Honda HRC’s lone rider in the 250SX West championship made his first appearance at the iconic Daytona International Speedway for round two of the championship while still continuing to heal following a recent shoulder injury.

Lawrence came into the day looking more and more comfortable on the bike, eventually qualifying fifth. Lawrence lined up for the heat race and kicked off the evening program with a win.

“This weekend was pretty good,” said Lawrence. “We had a solid heat race and got my first ever heat-race win, which was really cool. My body is starting to come around and I’m feeling better and better.”

When the gate dropped what was just the fourth main event of his career, he got off to a decent start and put himself in a good position early on, but a mistake saw him eventually finish the race in sixth. Despite the mishap, Lawrence came away from the weekend level-headed and looking forward to the upcoming trio of races in Arlington.

“I made one mistake in the main event that really let me down in the sand section,” he continued. “I was in a good position to fight for a podium spot, so I’m bummed about that.

“All things considered, my body is feeling healthy, my shoulder is coming around and I feel great on the bike. This is a good, calm way to head into Arlington for three rounds back to back, which I am really looking forward to.”