If there’s one thing for certain during the pandemic that has put the sport on hold in Australia for the past 12 months, Husqvarna’s defending national MX1 champion Todd Waters isn’t standing still. When the gates drop at Wonthaggi next month he will be in his very own ‘TDub’ gear brand, which comes in addition to all kinds of business ventures that the 30-year-old has introduced in recent times, including a newly-formed junior team to help the next generation of talent emerge locally. MotoOnline spoke to Waters for our latest Five Questions interview to get the scoop on his off-track journey. When did the idea come up to launch your own gear-line for 2021?

It was pretty much in Covid when we all lost our jobs overnight. We had some free time and started up a garage because we were running the factory Husky team and that went pear-shaped, so we started working the garage and that went well. It gave me time to step back and since I had the number one plate running into 2021, I thought it’d be cool to run my own gear. That’s where it started and it snowballed from there. I got contacts overseas, started getting samples, had to teach myself Adobe Illustrator how to design [laughs] and that was a crash-course, so we went from there. We’ve got a bunch of riders in it at the moment and raced Hervey Bay last weekend in it, so to see other people in TDub was really, really cool and a feeling I’ve never had. I’m planning to launch it online around July this year, that’s the plan, and I want to keep it exclusive so you can only buy the gear in limited runs – once the colours are sold, that’s it. I want to keep it exciting with new ranges all the time. Hopefully we’re in a few stores Australia-wide as well, but trying to keep it a niche sort of brand. We also colab with Fist Handwear, M2R and Albek bags with the TDub brand.

What is the junior team that you have recently introduced?

I’ve been doing a lot of coaching tours, as well as the garage, and I really enjoy working with kids. One benefit is to help guide them, try to fast-track their careers, which is something I didn’t have and that’s the idea behind it. We put together the TDub BSMX Development Program Racing Team, helping them, coaching them and mentoring them while bringing my partners on-board as well. It’s not easy, but we were able to pull my team together last year and our partners got involved, so it’s been good.

How many types of side-businesses do you have going on at the moment?

So, we have the TDub Garage, TDub Coaching Clinic where we work closely with riders and do our tours. We recently did an elite training camp, did a full day of physical fitness testing, enabling riders to see their lactate thresholds and heart rate zones from their blood, so you can see how much lactic acid your body’s producing at what heart rate. That’s something nobody’s doing here in Australia, even at the pro level, and something I did overseas training with Red Bull at their training centre. Off the back of that we have a training diary available, then we’ve got the riding gear obviously, which has been a massive project and a lot bigger than I thought. We just released a protein bar as well and the reason for that was something I could snack on during long cycles, so we partnered up and developed those. I started all these little projects when we weren’t racing and now they’re coming together all at the same time when we’re going back racing [laughs], but it’s exciting and keeps me on my toes, that’s for sure. I’m pretty keen to see where they go, it’s perfect timing while I’m current and am able to promote them all. 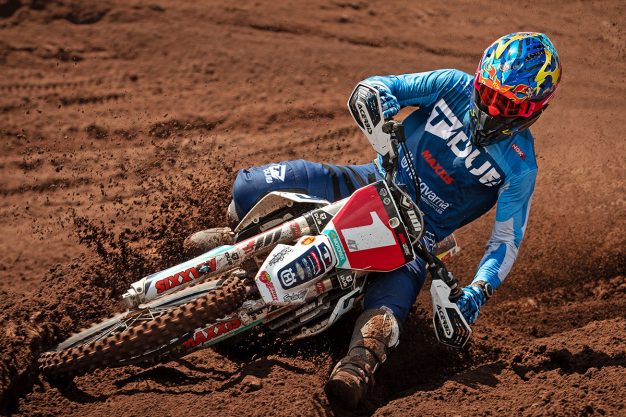 Where do you find the time to keep focused on your racing career with all that’s going on?

I feel better than ever, to be honest! I think it goes back to when I was a young racer doing my apprenticeship, it made me hungry because I was working during the week. My first-ever national when I was 16, I won it and I was working full-time, so going back to last year, every race we went in, we won. The Yamaha boys called me out to ride a 250, so I jumped on that and beat all of them factory guys on it and I was working full-time in the workshop, not training at all. It almost sort of takes pressure off me, makes me more determined to do well – I guess because I’m not riding or training 24/7, it makes it exciting for me. As a pro racer for many years you can get a little bit burned out and lose that, so it’s definitely ignited that for me.

Who are you anticipating will be your biggest threat in ProMX?

From a racer’s standpoint, I’m only focused on myself and doing the best that I can, but from looking at the outside in, it’s a tough year. Luke Clout is going to be a big threat, Hayden Mellross is on a good team as well and will be super-fast, then you’ve got Gibbsy [Kirk Gibbs] at Honda and he’s solid, plus Brett Metcalfe’s always there with experience. We’ve got some exciting new kids coming as well in MX1, Regan Duffy will be strong and I’m excited to race with him, also [Aaron] Tanti on the GasGas has been showing some speed, so it’s going to be good.