Questions and answers as we approach the halfway point of season 2021.

With eight rounds in the books and nine remaining, the 2021 Monster Energy Supercross season is approaching its halfway point. With one of the most stacked 450SX fields in recent years and a tight battle in 250SX East forming, the series has seen its share of action so far. MotoOnline answers some of the big questions that are arising, as the series awaits the start of the second half. 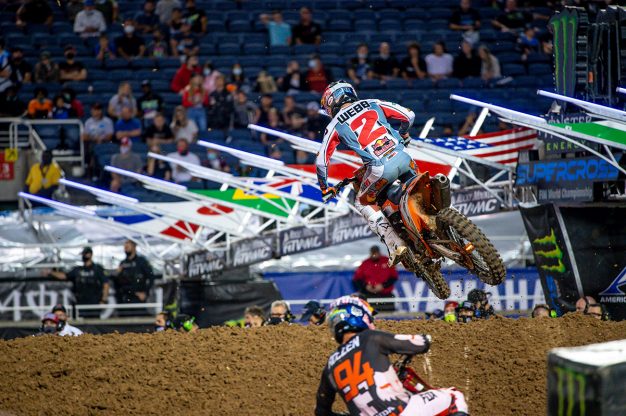 Q: Will Eli Tomac turn things around in the second half?

A: Tomac’s title defense has not quite gone to plan in the first half of the season. The Monster Energy Kawasaki rider has only found his way to the podium in three out of the first eight main events, notching only one win. He’s been near the front in the early to mid-stages of the race and hasn’t found his way to the podium, as we saw in Orlando 2. His late race form in recent weeks has caused many to call into question his fitness, but it’s unclear if he’s dealing with any underlying issues. One thing is for sure though, he’s not out of the title fight just yet as he currently sits in third overall just 31 points back from Ken Roczen. The next race in the series is at Daytona, a venue where Tomac is heavily favored, so there will be no better time or place for the reigning champ to get the momentum rolling in his direction, if he is to turn things around and get back in the mix for the championship.

A: Red plate-holder Roczen surfaced at the beginning of the 2021 season a seemingly changed man. Calm, cool and collected are words that describe it well, with the Team Honda HRC rider even rocking a ‘zen’-inspired butt-patch on his Fox gear for a round. He dominated the Indianapolis rounds, winning three in a row, and has only been outside of the top two in two main events this season. As the series headed to Orlando for rounds seven and eight, Roczen seemed to be the favorite for this title. Enter Cooper Webb. Following a ninth at the opening round, Webb has been inside the top five at every round and swept both races at Orlando. The Red Bull KTM rider has closed the points gap to just six as the series enters the last nine rounds.

Q: Are the residencies impacting the championship?

A: With Roczen sweeping Indianapolis and Webb winning both of the Orlando rounds, there’s no doubt that the residencies are swinging form in the 2021 series. Get off on the right foot in a particular stadium and the momentum’s on your side, but falter and you could be up against it for the next round or two (think Justin Barcia in Indy). In saying that, we saw three different winners in Houston, so it’s certainly not a given that the layout/terrain will favor any one rider. Q: Will the injured 250SX East riders return and make an impact at the remaining rounds?

A: The 250SX East championship field was severely depleted following a run of injuries early on. With Jett Lawrence missing a main event due to a shoulder injury and both RJ Hampshire and Austin Forkner out for a majority of the rounds, it left just Christian Craig and Colt Nichols to battle for the title. Lawrence returned to win Orlando 1 and seems that Hampshire or Forkner will be back on the line in the final rounds. If they do return, it’s highly likely they’ll have an impact on the outcome of the championship. If one of the front-runners takes a win while the other fails to make the podium, it blows the doors open on the title with just one race.

Q: Can Craig stop Nichols and secure his first title?

A: This question is a tough one and the answer will depend on which version of Craig shows up on a Saturday. Early in the season, this championship looked to be Craig’s to lose. He was out front of every session, charging hard and riding at another level compared to everyone on the track. Later in the season on the other hand Craig looked to be on the back foot a bit and to add to it, he injured his hand at the final round before their 10-week break kicked off. If Craig can heal up and recoup, there’s no doubt he’s got the speed and talent to make a push for the title, especially if there are more riders in the mix at the front. Starts will be imperative and Craig’s proven he can get those. Time will tell!

Q: Do we see anyone in the 250SX West class being able to beat Justin Cooper?

A: Cooper’s dominant performance in the opening round of the 250SX West series at Orlando 2 was evidence that he’s ready for battle. He took the top spot every time he was on the track, from first practice to the main event. What’s slightly scary for the competition is that he is fresh off of injury and has stated he was not quite at 100 percent going into the first race. With two weeks to prepare before round two, things are trending in the right direction for Cooper. That said, Monster Energy Pro Circuit Kawasaki’s entire team could challenge on any given night, as Cameron McAdoo got off to a solid start to the season with a second-place, rookie Seth Hammaker showed solid speed and, while Jordon Smith crashed out of the opening round, he’s got the talent to make an impact on Cooper’s bid for the title as well.