The injury will sideline him for an undisclosed amount of time. 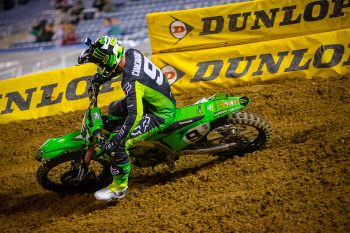 Adam Cianciarulo has confirmed he sustained a broken collarbone in his crash at Orlando 2 and will be off the bike for an undisclosed amount of time.

When the gate dropped Saturday, the Monster Energy Kawasaki rider grabbed the holeshot and lead the opening laps of the main event at round eight of the 2021 Monster Energy Supercross series in Orlando.

After being passed by Cooper Webb (Red Bull KTM), Cianciarulo crashed hard in the whoop section ending his race on the spot. The Floridian broke his silence about the incident on Tuesday via Instagram.

“A lot of time and effort goes into each season,” Cianciarulo said. “And it’s extremely frustrating to have a setback like we did this past weekend. I broke my collarbone and I’m gonna be off the bike for a bit. I’m really pissed off at myself for making that mistake. It’s completely unacceptable.”

After dealing with an off-season injury and a reported injury to the lower half of his body throughout the early stages of this season, Cianciarulo looked to have great pace and seemed to be back to full health in Orlando. While the frustration is clearly there, he’s already looking forward to putting in the work to get back on track.

“I won’t be discouraged, though. I love what I do and I put my heart and soul into it. I’m going to keep working on the things I need to in order to reach my goals. Simple as that.”

While it’s currently unclear when he’ll return to action, the series is currently on a two-week break ahead of Daytona on 6 March, giving him a bit of time to recover without losing too many points in the championship.