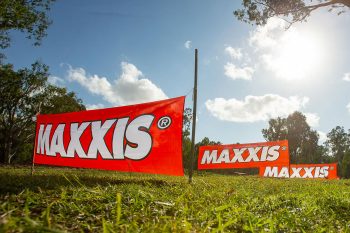 Maxxis has been named the official partner of the newly-formed MX3 development category in the Penrite ProMX championship, continuing to support pathways for junior and amateur riders into the senior ranks at a national level.

The gates will drop on the ProMX championship at Wonthaggi in Victoria on Sunday, 11 April, where the Maxxis Moto Australia MX3 category will debut for riders aged between 14 to under 18.

“Being able to partner with the MX3 class aligns well with our passion for grassroots and junior motocross,” commented A1 Accessory Imports CEO Jason Rogers. “Watching the development of MX3 will be a highlight over the year and we commend ProMX for providing a national platform for the next generation of racers to hone their skills and build experience to become the stars of tomorrow.”

MA CEO Peter Doyle welcomed Maxxis to the series: “To have Maxxis Moto Australia as a major partner for the inaugural Penrite ProMX Championship, presented by AMX Superstores, is sensational news for riders, teams and fans. The Maxxis MX3 class will showcase the sensational junior talent coming up through the Australian motocross ranks which will be on full display at round one.”

As used by defending national MX1 champion Todd Waters, Maxxis is distributed by A1 Accessory Imports and are available at local dealers nationwide. Find a dealer near you today www.maxxismoto.com.au and visit Maxxis Moto Australia on social media @maxxismotoaus.