Hunter Lawrence a new person in comparison to last year 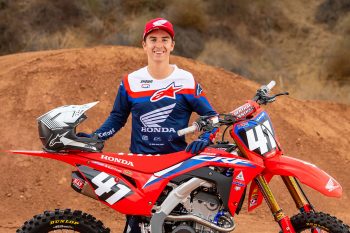 Lawrence, elder brother of eastern region race winner Jett Lawrence, has been on a mission to increase his body’s health and is in a positive state of mind entering 2021.

After debuting at Salt Lake City late last season on return from a string of injuries and then also being affected by injury through the Lucas Oil Pro Motocross series, the 21-year-old has fully recovered and will look to capitalize on experience gained in Utah.

“Completely different person, I strongly believe,” Lawrence commented. “My nutrition and health side of things, my body’s dialed in now, and injuries are all taken care of and good. I feel great on the bike, the team’s helped out and we have a great motorcycle.

“I can’t wait to get going and I’m just really excited, because as I said, I just feel like [I have] a new body now and stuff like that, so I think in comparison to Salt Lake, it’s just not even the same.”

Lawrence had sat out the final round of the outdoors last October after re-injuring his shoulder in practice, which prompted a deep-dive into what had been causing his relentless injuries that have caused havoc during his time in the US.

“We dug into it a lot, pretty deep on that after last year,” he added. “We just kind of felt like there were a lot of things going on that didn’t really make sense. My trainer Johnny O’Mara was quizzing me and figured out a lot of things with my body.

“It was kind of cannibalizing itself, eating away at all the muscle and tissue and stuff. Any crashes that would happen would result in any injury, just due to that, so it’s been cool – any training that I’ve been doing, my body’s been rebuilding itself, building muscle and gaining fitness.

“Previously, it was just kinda beating itself up and wouldn’t recover, so now looking back the way that I was, it’s mind-blowing how I could even make the during outdoors, compared to how I feel now.”

Once back on the bike, Lawrence has spent the majority of his pre-season training at the 83 Compound – former longtime base of countryman Chad Reed – in Florida, also completing a stint in California as part of his preparations.