Australian rebounds after sitting out the previous main event. 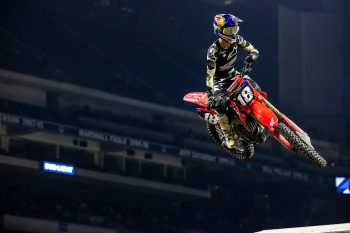 Battered and bruised from multiple crashes on Tuesday, Jett Lawrence battled through a shoulder injury to salvage fifth in 250SX East at the final Indianapolis round.

While it hasn’t been made clear exactly what problem the Team Honda HRC rider is dealing with, it was apparent throughout qualifying he wasn’t at 100 percent.

The second-year rider pulled out of sessions early, after logging solid laps and feeling out his ability. By the conclusion of the timed sessions, Lawrence was second behind points-leader Colt Nichols on the time-sheets.

He didn’t quite show the speed we’re used to seeing, but put up a solid fight for third place in the main against Colt Nichols (Monster Energy Star Racing Yamaha) – the pair of them going head-to-head until Lawrence had a mishap with a lapped rider that caused him to drop back to fifth.

“I was managing my injury all day, but I’m glad that my shoulder was good enough that I was able to ride,” he reflected. “It wasn’t what I was hoping for in terms of results in the main event, but it felt good to be racing and to get a heat-race win, even if I wasn’t 100 percent.”

The 17-year-old is now back in Florida, with a week’s time to recoup leading up to round seven of Monster Energy Supercross in Orlando this Saturday: “Now we get a full week before Orlando and I’m looking forward to coming back and getting back on top.”

With just one stop remaining in the eastern region prior to Supercross transferring to 250SX West, Lawrence is currently fourth in the championship standings despite missing last week’s main event.