Mosiman out after Indianapolis 3 qualifying crash

The TLD Red Bull GasGas rider to have surgery on broken hand. 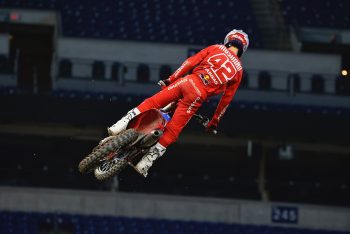 TLD Red Bull GasGas rider Michael Mosiman will require surgery on his hand after breaking it in three places in qualifying in Indianapolis.

Mosiman got connected with another rider in the first qualifying session, forcing him out tonight’s racing.

He explained the situation in a video statement not long after it happened.

“Gutted to tell you that I seem to have broken my hand in three places,” Mosiman said. “Just a stupid move at the end of the last practice.”

“It looks like it needs surgery. So we’re going to go do the work necessary to be back out there to battle with the guys.”

Before the incident, the 21-year-old clocked a lap that put him third overall in qualifying and seemed to have the pace to run with the leaders heading into the night program. It’s unclear when he’ll return to action.