Post-quarantine operation has Price on path to recovery 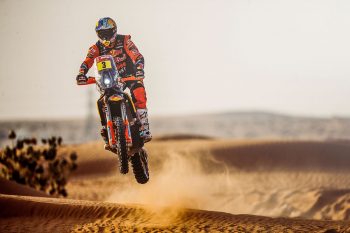 Rally legend Toby Price is on the path to recovery after finally being able to have an operation on the shoulder he broke in Dakar 2021 last month, undergoing the mandatory two-week quarantine on arrival back in Australia prior to being repaired.

Price underwent surgery in Brisbane with Dr Steven Andrews, who has been instrumental in the 33-year-old’s return from injury on multiple occasions, including when he broke his wrist and raced on to victory in 2019.

This time, however, Price’s significant shoulder injuries sustained while in contention on stage nine dashed his Dakar hopes altogether, the Red Bull KTM Factory Racing rider now facing a further two months on the sidelines before he can potentially return to riding.

“Just wanted to say a massive, big thank you for all the well-wishes and keeping me pushing through these rough times at the moment,” Price commented. “We’re all in good hands and the surgery went really well even though it’s two and a half weeks later after Dakar – we had to quarantine and do all that crazy stuff, but that’s the world we live in.

“I’m just glad to be out of serious pain. The doctors probably through some race tape in there and some zip-ties to put it all back together… but nah, there are some titanium plates, some screws and wiring holding the collarbone down, also some new ligaments and stuff in there as well, so it’s a good job. Hopefully in seven or eight weeks we should be back on the bike.”

It’s been a massive beginning to the year for Australian fan favourite Price, taking on the gruelling Dakar Rally in Saudi Arabia before being injured and rushed home for quarantine and this eventual surgery, as well as being recognised in the Australian Day 2021 Honours, receiving a Medal of the Order of Australia.