It’s fun, it’s fast, it’s the all-new for 2021 GasGas MC 450F, put through its paces at Fox Raceway with the crew from GasGas North America. For a more Detailed look at the models, be sure to take a look back at the post we did late last year when the latest production bikes were first unveiled.

The mission for the KTM Group with these GasGas models is to have a lower barrier to entry for customers, with both the 450F and 250F models being roughly $800-$100 cheaper than the KTM/Husqvarna variants. How did they get the price down without compromising performance? It actually appears very simple, as soon as you look at the bike. They went to a silver wheel fitted with a Maxxis tyre, forged aluminium triple-clamp, a straightforward header- and mid- pipe and there isn’t a dual-setting map switch on the handlebar. The question is, does the GasGas lose performance as a result of these changes? In short, no, it doesn’t.

First, let’s talk chassis. The GasGas is using the staple 4130 chromoly frame with a WP fork and shock that has a European/global setting, unlike the KTM and Husqvarna with specific American settings that are also used in Australia. Once I hit the track, I was very impressed with the comfort and traction I had.

The Austrian brands tend to have less comfort than Japanese models at slower speeds with a bit of a harsh feeling on slap-down landings, but the GasGas MC 450F had great comfort for me in both the shock and fork. I would say the enormous amount front-end comfort comes from the triple-clamps, since they flex and absorb energy much better than the KTM clamps. 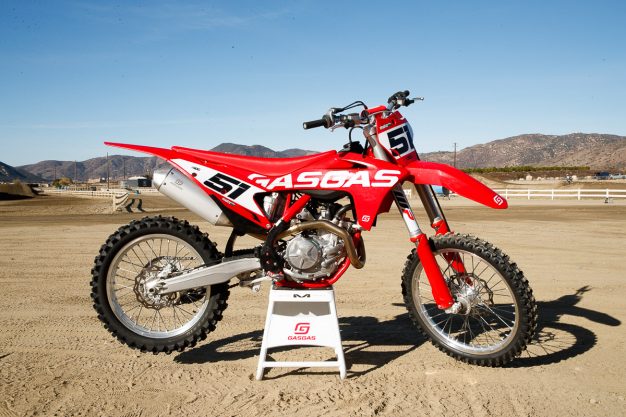 I started with 151 psi in the WP AER fork, but after I was comfortable and wanted to push the bike a little harder, we upped the fork pressure to 153 psi so on track, I was 156.5 psi. The WP AER fork builds almost three psi in pressure once the fork heats up when riding. Once I made the change on the fork to hold it up on the big jumps and rough sections, the bike was slightly out of balance on the exit of turns.

To get a better balance for this I went a half turn in on the high-speed adjuster on the shock so it wouldn’t get as deep under load. Both of these changes also helped with better control in the roller sections and high-speed berms and, honestly, I was impressed that I didn’t lose any comfort from these changes. This might not seem like a big deal, but the seat on the bike is also really comfortable.

The powerplant on the GasGas MC 450F is potent, but also very rideable. Power these days is not a problem when you are talking 450cc, so it really comes down to the tune of the ECU. Although the GasGas does not have a dual map switch on the handlebar, the tune of the ECU is clean and efficient with no bog or stumbling through from the bottom to the top. Also, the gearing on this bike is great. If you want to use second gear in turns to accelerate hard, you don’t have shift mid-turn. If you are more of a smooth rider, you can shift up a gear and roll third gear through turns without having to stab the clutch multiple times. I would say the Gas Gas motor is one of the easiest motors to ride in the class. I believe the simplified pipe it is one of the key components to making it so smooth and easy to ride.

The details on the GasGas are not to be overlooked. When it comes to the controls, the Brembo brakes and clutch lead the way with the best stopping power and general feeling. The Maxxis tyres are also a great touch with a very soft compound and an impressive amount of traction that gives you an almost factory-feeling tyre. The only downfall is that it wears out quickly, as you’d expect with this compound.

The Neken handlebars are okay by me, but the bar-pad has to be changed as soon as you can get your hands on one since the stock one is half of the size of what a rider is typically used too. ODI lock-on grips lead the class in that segment and are a personal favourite grip of mine – the diameter is great for all hands and the comfort is on par with a traditional grip. Looks and ergonomics are something not to be overlooked with the 2021 GasGas MC 450F. This brand has a beautiful deep red plastic kit with a forward-thinking, simple graphic set that is sublimated into the plastic. The feeling of the bike from an ergonomic standpoint is strong, easy to move around on with no issues of snagging my leg on the shrouds in deep ruts or jumping. That’s always a plus.

My final impression of the GasGas MC 450F is that I feel the group has brought to market an impressive new model in a very short amount of time. It’s not a KTM or Husqvarna and it really does stand alone with its comfortable chassis and user-friendly powerplant. This is a great bike with some upsides at a reduced cost, meaning it’s certainly worth taking a look at. Also watch our Overview edit or listen to our Feedback podcast for more assistance in your decision-making process. 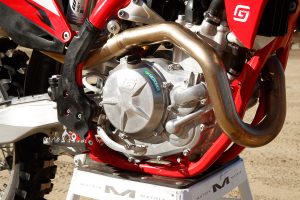 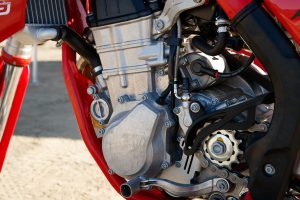 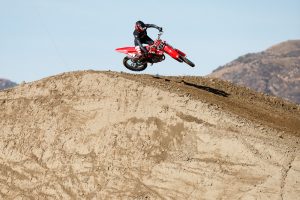 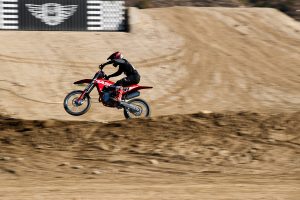 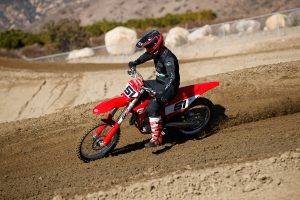 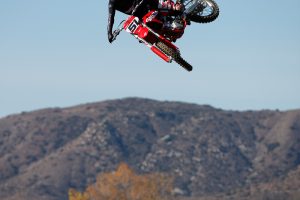