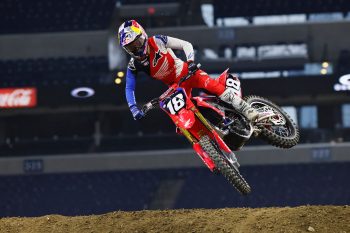 Australian teenager Jett Lawrence has been forced out of the 250SX East main event at Indianapolis 2 with a painful shoulder from a fall in his heat race tonight.

The Team Honda HRC rider exited heat one of the evening after crashing heavily, but managed to return and win the LCQ for a place in the final.

However, after also crashing in the whoops this afternoon, a late decision was made by Lawrence and his team not to line-up for the main, effectively ending his hopes of challenging for the 2021 championship in Monster Energy Supercross.

It’s not yet determined the extent of any potential injuries that Lawrence has, however, at just 17 years of age it’s been a bruising couple of weeks for the highly-rated newcomer. He’s now fifth in the standings, 39 points outside of Colt Nichols (Monster Energy Star Racing Yamaha).

“The day started off pretty good,” Lawrence reflected. “It was looking good, but unfortunately I had a crash in the second qualifying session. I didn’t really hurt myself much, just had a bloody nose. I hit a tuff block that was in a bad spot and it was put back in the same spot for the heat race – I hit it straight on and fell straight on my head and shoulder.

“I was looked at by my therapist and there might be a little bit of separation, but we’re just going to play it by ear. Hopefully I get better so I can ride this Saturday, but we’ll have to wait and see. It’s not really how I wanted the night to end, but it happened and now I’m going to focus on getting better for this weekend or Orlando.”

In a confusing turn of events, it was Mitchell Oldenburg (Muc-Off Honda) who appeared to be given Lawrence’s position on the start-gates, rather than Bobby Piazza (Yamaha), who was fifth in the LCQ. Later it was clarified that the AMA was allowing Oldenburg to start as the 23rd rider regardless of if Lawrence was lining up.

Oldenburg had a bike malfunction and crashed out of his heat, but it’s understood that race officials didn’t allow him to start the LCQ after mistakenly ruling that he had changed frames when, in fact, his team had instead completed a rapid engine swap.