Former 450SX champion opts to recover and return in an upcoming round. 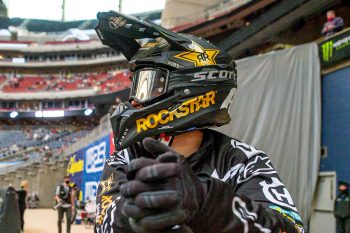 Rockstar Energy Husqvarna’s Jason Anderson has pulled out of tonight’s fifth round of Monster Energy Supercross in Indianapolis with a dislocated finger.

Anderson injured his finger during this afternoon’s first timed session and he attempted to ride during the second qualifier, but to no avail.

“Been a really tough start to my season,” Anderson stated. “My results are not where they have been in past years and I’m not happy about it at all.

“Today I didn’t crash or anything, I just landed, my hand slipped and I dislocated my finger. As much as a frustration, it’s been no place I’d rather be than here trying to problem-solve how to go faster and be better on my dirt bike!”

He then confirmed that he won’t be back for the night show and a return date remains to be determined: “Sorry to my sponsors and fans, but I’m gonna heal up and be back out there trying hard ASAP.”

Following a difficult opening portion of the 2021 season, former 450SX champion Anderson is currently 12th in the point-standings with a best result of seventh at Lucas Oil Stadium on Saturday.