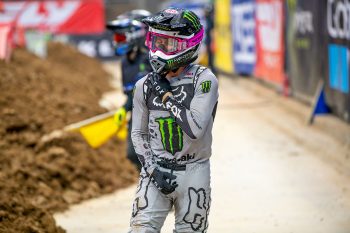 Austin Forkner underwent immediate surgery on his broken collarbone sustained in Houston last week and is now aiming to return as soon as it’s safe for the Monster Energy Pro Circuit Kawasaki rider to do so.

Forkner crashed during qualifying at Houston 3 last Saturday and was forced out of round three of 250SX East in the Monster Energy Supercross championship. It was a bitter blow after missing a portion of last year through injury.

An update was released by Forkner during yesterday’s round in Indianapolis, which Forkner had to sit out, and it’s expected that he will miss the upcoming two rounds at Lucas Oil Stadium prior to a potential return.

“Unfortunately in that crash at Houston I broke my collarbone, knew it right away when I felt the bones moving around,” he confirmed. “It was broke in three or four spots, so it wasn’t pretty, but I immediately had surgery and got it plated.

“Obviously I’m out for this week, but looking to make to a decision with my team to come back as soon as I can safely. Obviously I’m super-disappointed, but I just wanna thank my team and everyone who’s still backing me.”

Forner was a solid second at Houston’s opening round in mid-January, but was sixth at round two following an incident with RJ Hampshire (Rockstar Energy Husqvarna) – also injured at Houston three that same week. A specific return date is yet to be confirmed.