Multiple-year deal in place between Penrite Oil and MA from 2021. 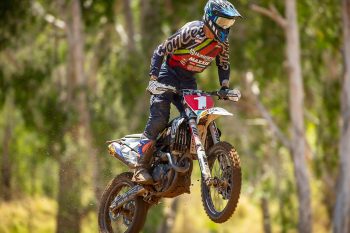 A title sponsor for the inaugural ProMX Australian Motocross Championship has been named by Motorcycling Australia (MA) ahead of the 2021 season.

Penrite Oil will become naming-rights partner of the new-look series, which is scheduled to commence on 11 April at Wonthaggi in Victoria.

“Penrite are a significant global company that prides itself on developing world class oils and lubricants,” commented MA CEO Peter Doyle. “With this new partnership we hope we can take the Penrite ProMX Championship to the world.

“Penrite have been a valued and proud Australian owned brand providing quality products in the industry for nearly 100 years and for them to see value and believe in the direction we wish to take ProMX in our inaugural season is a significant boost for the sport.”

Rumoured since late last year, Penrite’s association with the ProMX series comes after it parted ways with the Konsky Motorsport Group-operated factory Honda team. That organisation is yet to announce a replacement at this point.

“Motorbikes are something very close to Penrite and myself personally,” Penrite Oil CEO Toby Dymond said. “My brothers and I all grew up around bikes – it’s been a lifelong passion. Likewise, Penrite have had a long association with motorsport and we have always been active in the motorsport scene.

“What better place to test and better develop our Australian owned and made products right here with the motocross bikes under race conditions that will compete in the 2021 Penrite ProMX Championship.

“Partnering with MA on the Penrite ProMX Championship allows us to support local clubs, grass roots motocross riders right through to the elite who will be competing in this year’s championship.

“It’s really a great partnership, our world-class and renowned Penrite products which are exported around the world and made right here in Melbourne, and beginning a new chapter with Motorcycling Australia and Australian motocross.”