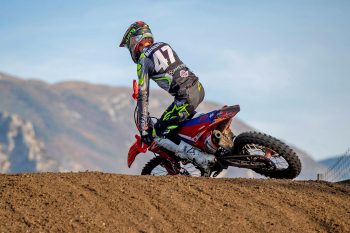 Teenager Bailey Malkiewicz will return from Europe to national ProMX in 2021 after signing to rejoin WBR Yamaha Bulk Nutrients as part of an expanded four-rider roster.

Malkiewicz won the 125cc Junior World Championship and Australian MXD Championship with WBR in 2018, going on the spend a single season in MX2 before heading to Europe.

Last year, Malkiewicz was 14th in the MX2 World Championship after riding for Team Honda 114 Motorsports, gaining immense experience and achieving top 10 moto finishes during the disrupted season. He will transition into MX1 for 2021 riding a YZ450F in Australia.

“2020 was a hard year for everyone and, while I had a great time in Europe and got the chance to race at a world level, there was nothing there for me in 2021, so it was best to come up, re-evaluate a few things and get back to my best form,” the 19-year-old said.

“My goals to race at a world level aren’t over and I still aspire to go back as I’m young and have plenty of time, but I need to ensure I got at the right time, with the right support and when I’m healthy and in good form. I learned a lot while in Europe and it has made me grow up in many ways.

“I think I have matured a bit both on and off the bike and can see things a bit more clearly now about where I want to be and what I need to do to get there. I’m so thankful for the WBR Yamaha team to step up and help me in 2021.

“We hade a great partnership in 2018 when I had my most successful year, so I know I’m surrounded by the right people and making the jump to the 450 class is fresh and exciting. I cant wait to get the season underway and I will be ready to go at round own of the ProMX.”

The addition of Malkiewicz to WBR comes alongside Liam Andrews, who moves up through the Yamaha Junior Racing program directly into MX2. The pair join previously-announced duo Maximus Purvis (MX1) and Alex Larwood (MX2) in the four-rider effort.

It also confirms that Yamaha Motor Australia’s factory teams have turned their back on the newly-introduced MX3 class altogether, with both WBR and Yamalube Yamaha Racing – each entering official MXD teams in past years – solely focusing on the MX1 and MX2 categories.