Nichols rises in 250SX East to tie on points with teammate Craig. In the final main event of the evening, it was Webb with his first holeshot of the season as Team Honda HRC’s Roczen also launched his Honda to a great start.

It wasn’t long until Roczen set up a pass on Webb, taking the lead with authority, jumping out to a 1.5s lead. Points-leader Justin Barcia (TLD Red Bull GasGas) found himself in sixth with pressure from Tomac after the first five minutes of the race, the two would move through on Plessinger and Stewart into the top five.

Barcia then put on a charge taking chunks of time out of the leaders through the next few laps and catching Cianciarulo at the 10-minute mark. Just in front of them, Webb kept Roczen honest, with around a one second gap between the two.

However, Barcia’s podium charge ended when he found himself on the ground in the sand section a few minutes later, letting Tomac by for fourth, but not for long as Barcia rebounded quickly to retake the position. Roczen had stretched out a 3.5s gap just past the midway point of the race.

Webb rebounded at about the five-minute remaining mark, charging his way to the back of Roczen with one lap left, setting up for a wild finish to the race. As a lapped rider took the preferred line in front of Roczen not once, but twice, Webb didn’t wait to pull the trigger and passed him up the inside.

Roczen stayed in it, but it was too little, too late as Webb took the checkers and his first win of the season. It was a lonely third place for Cianciarulo followed by Barcia, Tomac, Stewart, Plessinger, Rockstar Energy Husqvarna duo Jason Anderson and Zach Osborne, plus Justin Brayton (Muc-Off Honda) rounding out the top 10.

It is now Roczen on top of the point-standings with the red plate by a single point over Webb and Barcia leading into Indianapolis next weekend.

A 1-2 finish for Monster Energy Star Racing Yamaha led by Colt Nichols at Houston 3 sees he and Christian Craig tied on points three rounds into the 2021 season.

Points-leader Craig got a solid start with teammate Nichols in second and, from there, the pair went into battle at the head of the 250SX East pack.

Rookie Max Vohland (Red Bull KTM) snagged the best start of his career followed closely by Michael Mosiman (TLD Red Bull GasGas) and Joshua Varize (KTM). It was a tough start for Team Honda HRC’s Jett Lawrence, who recovered to seventh at the end of lap one.

Vohland had an impressive opening five minutes of the race, keeping the TLD Red Bull GasGas of Mosiman at bay. They swapped spots, with Vohland putting a solid block pass on Mosiman, but it didn’t last long as Vohland would slip back to sixth behind Mosiman, Jo Shimoda (Monster Energy Pro Circuit Kawasaki) and Lawrence.

Lawrence soon set up an excellent pass through the whoops on Shimoda and set sail after Mosiman, who had stretched out a four second gap in third. All the while, Craig was maintaining around a one second gap from his teammate.

At the halfway point, Nichols began to put on a charge, asking major questions of his teammate just ahead, closing the gap to under a second with three minutes to go, when he’d make a pass in lap traffic. Craig’s speed through the whoops couldn’t be matched, as he blitzed by and up the inside of the following corner, taking the lead back.

In the same lap at the same spot Lawrence took over the final podium spot with a tough block-pass on Mosiman taking him to the ground. Nichols got back by Craig the following lap in lap traffic and set sail from there, gapping him by 2.2 seconds in the following two laps.

In the end, it was Nichols taking the win by 3.4s over Craig, Lawrence, Shimoda and Mosiman, who rounded out the top five. Vohland earned his best finish in sixth, followed by Joshua Osby (Phoenix Racing Honda), John Short (BarX Chaparral Suzuki), Kevin Moranz (KTM) and Thomas Do (KTM) completing the top 10.

The point-standings now have both Nichols and Craig atop the standings, with Lawrence six points behind in third position as Monster Energy Supercross now takes seven days off and will return in Indianapolis, Indiana, next Saturday, 30 January. 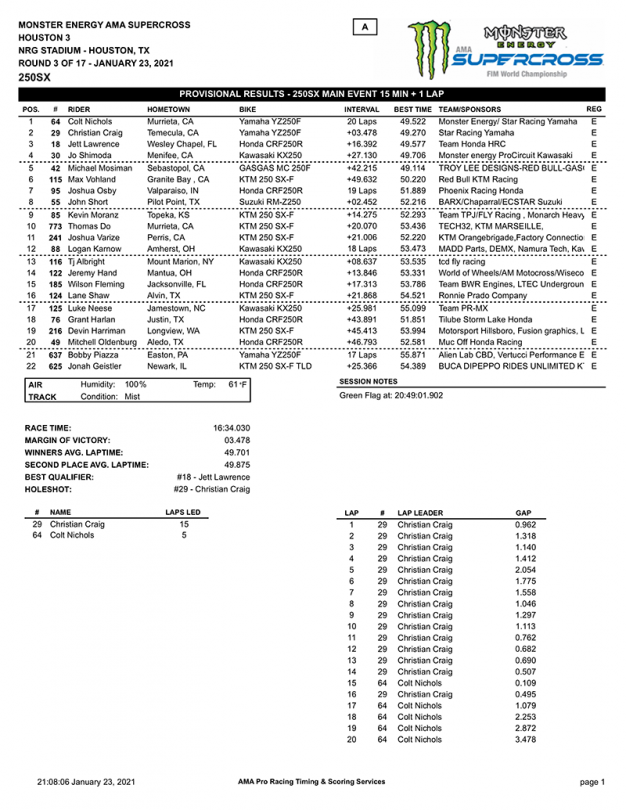