Rookie Ferrandis on podium, as is Brayton again at Houston 2. 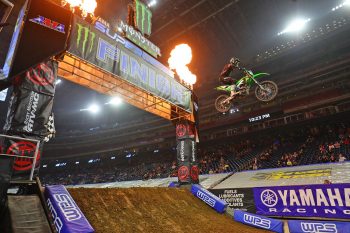 Defending Monster Energy Supercross champion Eli Tomac rebounded in the most convincing way possible at Houston 2, going on the score his first victory of 2021 on a night that Dylan Ferrandis and Justin Brayton – riding for the new Muc-Off Honda team – also earned podiums.

Heat one winner Chase Sexton (Team Honda HRC) took the holeshot over Tomac, with Adam Cianciarulo on the second of the factory Kawasaki quickly taking the second spot from his teammate.

Brayton, meanwhile, got off to a great start in fourth, followed by Malcolm Stewart (Monster Energy Star Racing Yamaha), Zach Osborne (Rockstar Energy Husqvarna) and the pair of Red Bull KTMs, Marvin Musquin and Cooper Webb. Three laps in, Cianciarulo had an off in the sand section, leaving Sexton with a 4.5s gap over Tomac, but just a lap later Sexton’s race came to an abrupt halt with a massive crash also in the sand.

From there the battle for second place was on, with Osborne taking the spot initially from Brayton, ahead of a dogfight between Dylan Ferrandis (Monster Energy Star Racing Yamaha), Stewart, Webb and a hard-charging Ken Roczen (Team Honda HRC). Then, the sand claimed another victim in Musquin, dropping him to 10th.

With 10 minutes left Osborne started putting on a charge for the lead, cutting into Tomac’s advantage as Ferrandis snuck by Brayton for third place. Osborne’s push to the front resulted in him hitting the deck, handing the second place to rookie Ferrandis.

After stalking Roczen for a majority of the race, Webb set up a great pass for fourth and he attempted a run at Brayton for the podium in the closing stages of the race. In the end, it was Tomac taking his 35th career win by 4.9s over Ferrandis and Brayton.

By virtue of his win, Tomac has climbed from 13th position following the disaster at H1 to sixth, only five points outside of the lead. It’s now Roczen who takes over the red plate, pending any post-race penalties that may be applied.

While the results and standings are yet to be made final as of publishing due to pending appeals, as it stands Roczen will now have a single-point lead over Barcia, with Ferrandis climbing to third. Monster Energy Supercross will continue this Saturday, 23 January, again at NRG Stadium in Houston.

Note: Penalties have been applied to multiple riders following the event. 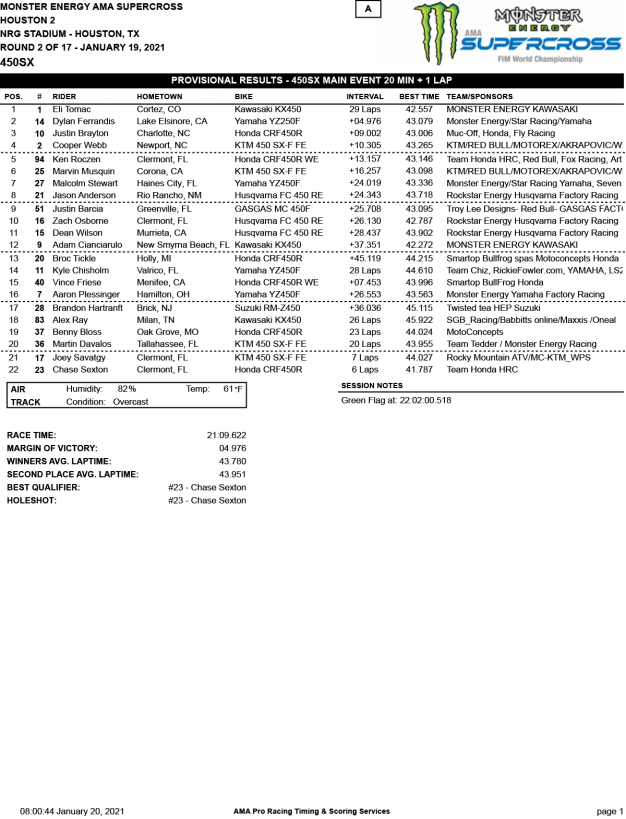