Teenager leads every lap of main event to deliver for Team Honda HRC. Lawrence, just 17 years of age, led every lap of the 15-minute plus one-lap final, delivering for Team Honda HRC and also the vast potential that he’s been recognised for since entering the professional ranks.

“I got a brilliant start, the track was very technical and paid in my favour,” Lawrence beamed. “In the sand section it was tricky and all day I’d been eyeing going triple all the way through. On the first lap I thought, ‘okay, I think I can do it next lap’ and I came around, seated into it, went too long and had to back it down a little bit.

“No, it was… just felt really good to be out there. I put in many laps, it was just so good to be out here and to finally get a win under my belt so I’m not on the start gate going, ‘come-on, you need to get a win today. It’s just awesome, I’m speechless almost – I don’t know what to say! It feels good.”

Lawrence launched himself out of the gate to take the holeshot with title rival Austin Forkner (Monster Energy Pro Circuit Kawasaki) in tow through the first half a lap. It didn’t last long for Forkner, as he made a mistake in the whoops and handed second place to RJ Hampshire (Rockstar Energy Husqvarna), who set out after Lawrence.

Deeper in the pack, the points-leader Christian Craig (Monster Energy Star Racing Yamaha) set out to recover from a mid-pack start and settled into fifth behind his teammate Colt Nichols with about 10 minutes to go. With eight minutes left, Forkner started to push and closed the gap to Hampshire, tripling up the inside and attempting at pass, putting both on the ground.

The move stretched Lawrence’s lead to over 10 seconds ahead of Craig, while Nichols stayed consistent and reeled his teammate back in with short time left on the clock and managed to get by, but it was too little too late as the teenager from Australia went on to take his first career win.

In the championship it’s still Craig who holds the red plate, three points ahead of Nichols, as Lawrence climbed to third and just one more point in arrears. Monster Energy Supercross will continue this Saturday, 23 January, again at NRG Stadium in Houston. 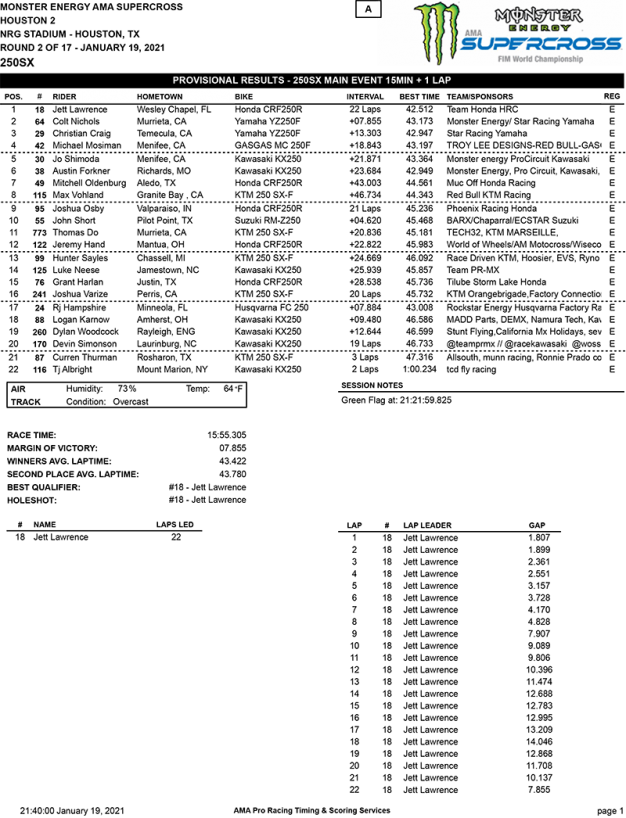