Sixth ‘not terrible’ for Lawrence in maiden HRC outing 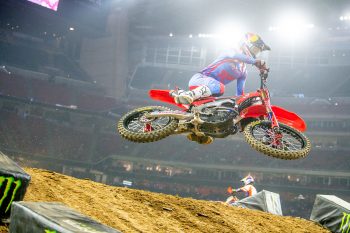 Team Honda HRC’s return to the 250SX category with Jett Lawrence resulted in sixth on Saturday at Houston 1, the result ‘not terrible’ for the Australian teenager.

Lawrence was lightning-quick on press day and carried that form into qualifying when he topped the opening timed session and wound up second on the combined charts.

The 17-year-old was third in the opening 250SX East heat race of the year. In the main event, he was circulating in third through much of the first half and eventually crossed the finish in P6 after a fall on the final lap. He was collected by [RJ] Hampshire and went down again while attempting to remount.

“The first race day wasn’t too bad,” Lawrence reflected. “There were a few mistakes that I wasn’t happy about, but I walked away without too much damage to my body. In the first qualifier I put a really good lap time down for P1 and then the second one I put another consistent one down, getting second behind [Christian] Craig.

“In the heat race I had a few small mistakes. I was excited for the first race and a little too energetic, but I ended up getting third. In the main event I was kind of playing it too safe and backed off too early and gave away what should’ve been a holeshot.

“I spent too much time behind another rider in the first half and had some other people pass me. I ended up finding a pretty good flow at the end and was fourth after RJ [Hampshire] went down. I tried to make another pass with a lot of charging, but that didn’t go as planned.

“[I used] too much front brake and a wrong line in the turn ended up flicking me. I got up fairly quick, but then someone came and hit me again, knocking me back down. I ended up getting sixth, which isn’t terrible, but not what I wanted but I’m still fairly happy with it.”

High expectations have been placed upon Lawrence entering his second year of Monster Energy Supercross despite his youthful age, lining up alongside Ken Roczen and Chase Sexton in the factory Honda organisation. Elder brother Hunter Lawrence will take charge of the 250 duties in the western region next month.