Konsky Motorsport Group owner on setting up Supercross team in the US.

Long-time Australian team owner Yarrive Konsky has committed to another year of running a Monster Energy Supercross effort in 2021, featuring Muc-Off as new title sponsor, equipped with the latest CRF450R and making a strong start at Houston. In a stacked field at the opener, Justin Brayton (450SX) raced to sixth and Mitchell Oldenburg (250SX East) eighth in the main events, setting the tone for what promises to be a successful season ahead. Our latest Industry interview gets Konsky’s take on H1 and setting up an international program. 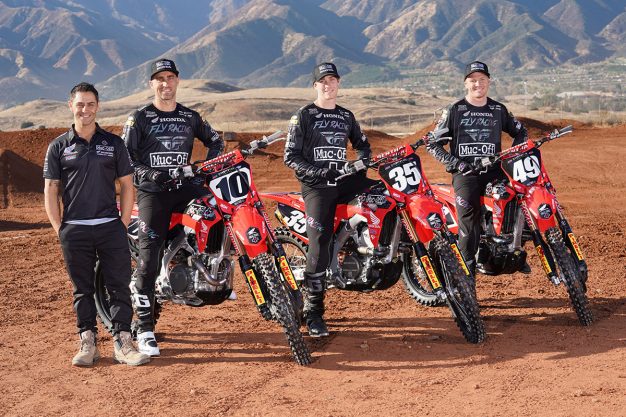 Looking back on the opening round, Yarrive, are you happy how it all went?

Round one went well considering the timelines we had to work with. We received our bikes in December, which gave us limited time on the 2021 CRF450R before Houston – the progress we made in a short timeframe led to the credible results we achieved. I placed a great deal of urgency on everyone and I must admit our team, sponsors and suppliers stepped up, everyone who committed to the program came through and American Honda and Team Honda HRC extended themselves to ensure we were ready. There were 15 factory riders, including Suzuki and three factory-backed riders, so sixth in the 450SX main was a commendable position. The positives to take from the opening round are we guessed right in our preparation and that’s a result of the people and companies that surround our team. We have support from Showa with Brayton and KYB partner our 250 program, plus Twisted Development, JE Pistons, Vortex and Renegade Race Fuel all work closely together to help create our power-plants and we compliment them with FMF products. We’re also truly fortunate that Brayton continues to receive support from HRC. Pirelli is a new partner this year and they’ve also stepped up, our team continues to receive great support from WPS with Fly Racing. We still have areas we need to improve, but we have great people around us and I’m confident that we’ll build on the results we achieved. The hardest part is there are 14 to 15 fast guys, so the progress we achieve race to race might not reflect the on-track result. We were caught out with the dirt on Saturday, it’s vastly different to the dirt we’ve been riding on. The Houston track held moisture and most of the tracks we’d tested on were hard-pack. We’ve made some adjustments ahead of Houston 2 and we hope they’re in the right direction.

Honda Australia has a relationship with HRC and so have some of the riders who have competed in our program, so it’s through them that things have happened. The first year Brayton came over we were fortunate to have a relationship with someone at American Honda. Tony Hinton from Honda Australia had a strong relationship with Tetsuya Kawahara and together with Dan Betley, things moved fast to ensure Brayton had good product. We’ve also had Factory Connection riders compete in Australia, along with Davi Millsaps and Jeremy McGrath. We’ve been fortunate to have some reputable riders compete in our program, all of whom have strong factory relationships. Justin Brayton has certainly advanced everything through his personal relationship with Team Honda HRC. Overall, it’s a combination with Honda Australia’s relationship with Honda Japan, with American Honda and timing. Timing is everything in most businesses regarding opportunity, because without Team Honda HRC’s support we might not have achieved four-straight Australian Supercross Championships and we genuinely appreciate their inclusion.

What was the drive for you to set up a team overseas? Most people would think that running an Australian team alone would be enough to keep anyone busy.

I’ve been involved with Honda since 2003 with Troy Dorron, but ever since I was a kid I’ve looked at ways to challenge myself. In racing, doubt crept in and stopped me achieving what I felt I was capable of – I let fear get in the way and I’ve let that happen in business as well. I just love to dream, I’m inspired by people who are able to create things in life and I love motorsport for the simple reason that it challenges you to be better. That motivates and drives me. I’m 46 now and I don’t want to limit myself, but opportunities are limited if you just stay in Australia. I’ve never been driven by money and, if I was, I could set myself up nicely with what I have in Australia, but that’s never been my focus – this world vastly relies on people having a go and I don’t want people to frown on me for sticking my neck out and having a crack. The bottom line is, Australia has limitations due to its population and, therefore, its reach. I’ve developed a set of skills that enable me to put together marketing campaigns and initiatives that help expose brands, but if there are limitations to that reach it’s harder to get off the ground. The costs of racing in America aren’t vastly different to Australia, except for some components and some financial elements. Basically it’s a truck, parts, workshop, the logistics of getting a team around and testing, but the reach here is an audience of 6.5 to 7-million people with live coverage, plus about 1.4-million crowd attendance across both Pro Motocross and Supercross. In Australia it’s much less. I’ve also learnt as a racer that it’s possible to develop a motorcycle that can win with the right resources. I love the technical side of racing, I worked on my own motorcycles since I was 12, but I soon learnt you can’t go racing without money, so I spent an equal amount of time focusing on the business side of racing. That affected my racing results as my focus wasn’t singular, but you can’t race without money and unfortunately my dad’s taxi driver’s salary couldn’t pay for a professional career in racing. I will say without the commitment we receive from companies like WPS, FMF, American Honda and most recently Muc-Off and Pirelli, none of this would be viable. I would’ve loved to have taken this step 10-15 years ago, but with all the different elements coming together, the timing seems right to do it now. 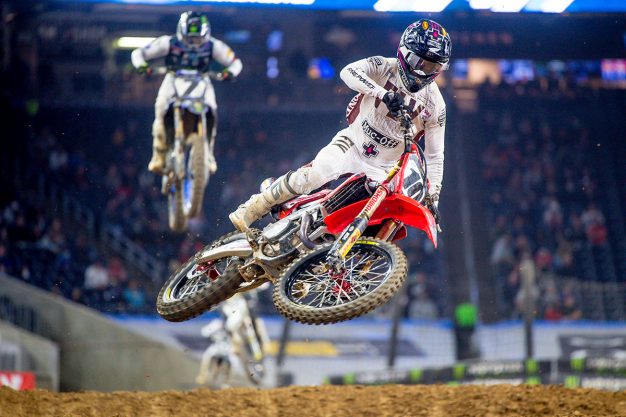 How did the relationship with Muc-Off come about?

I’m forever looking at who’s doing what in the marketplace. My position in Supercars with Brad Jones Racing requires it and my peripherals are vastly different to what most people look at when they watch sport. I love watching races, but I’m also studying teams, sponsors, commentary and how everything is being delivered. I genuinely saw Muc-Off on MotoGP rider Andrea Dovizioso’s helmet. I’d seen the brand before, but hadn’t paid it any attention as I thought it was a bicycle brand. After seeing the logo on Dovi’s helmet I did some investigation, where they were from, where they were focusing their efforts – which was primarily mountain-biking and cycling – how they marketed their brand, their activations, their look and, equally importantly, the reputation of the brand and products. I emailed them early one morning and got a prompt reply saying my timing was impeccable and that they were interested to talk further. I built a comprehensive presentation and we went back and forth and came to an agreement. They don’t want to be in the sport short-term and we’re working together to make this a success.

Tell us a bit about your actual team structure, as obviously you can’t be based in America permanently. How does it work?

We have very skilled and experienced people who all have 10 or more years’ experience. Brent Duffe has been Brayton’s mechanic for six years, a race mechanic for more than 10 years and an expert racer. Nathan Alexander is our crew chief and Mitchell Oldenburg’s mechanic – he worked at Honda and has been a mechanic for Andrew Short, Blake Baggett and Aaron Plessinger. Scott Youngstrand was with KTM’s R&D department and has over 25 years’ experience. Jamie Ellis from Twisted Development worked with the Rockstar Suzuki team with Jason Anderson and Davi Millsaps. Brad, our semi driver, is a top-15 superbike racer and owns a race shop, plus Rachael, our finance controller and logistics manager, has worked with teams for more than 10 years. We rent a factory beside Twisted Development, we bought the old RCH test truck as a proper test vehicle, we lease a semi from ADR and our suspension program is split, with the 250 being with factory KYB and the 450 program factory Showa. We have Australian Ricky Gilmour working with us on our 250 program, while Team Honda HRC and Showa work with us on the 450 program. Our structure doesn’t require micro-managing due the level of experience everyone has. Now that the pre-championship preparation and organising is complete and the show’s on the road, it’s about maintaining momentum, forward planning and budgetary controlling. I can manage a lot of the sponsorship expectations remotely. I want a successful program in America that’s sustainable and competitive, but I have an equal focus on winning championships in Australia. I’ll be back for our second round of testing in Australia and the opening round of the ProMX Australian Motocross Championship, but coming to America has helped my progress with all of our partners and suppliers and we’ve already proven to build competitive motorcycles. All of the information we gather from testing in America is used for our team in Australia.

Note: Today, following this interview, Brayton landed Muc-Off Honda on the podium in third at H2.