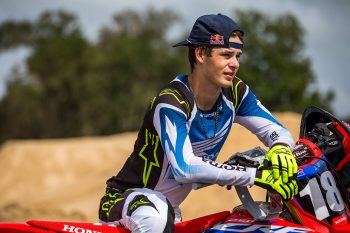 Teenager Jett Lawrence will go into tomorrow’s first round of 2021 Monster Energy Supercross open-minded, despite being one of the most hyped riders of the entire pre-season.

The 17-year-old stunned last year with a string of solid performances both indoors and out, earning him lucrative new contracts with Team Honda HRC, Red Bull and Alpinestars.

Lawrence became the sport’s hottest young ‘free-agent’ following the shock closure of his former Factory Connection team and, while his crew and factory CRF250R are vastly similar to that of his rookie season, it’s the experience of 2020 that will count this time around.

“Mindset is still the same, just to ride as best as I can and to ride smart,” Lawrence commented. “I definitely soaked in a lot of stuff last year, got to race a lot of fast guys and learned a lot of good lessons – some the easy way, some the hard way.

“I’m just going into this season with an open mind. I want to make sure that I stay focused on what I’m trying to achieve, make sure I’m 100 percent every weekend and make sure I walk away on both legs every weekend.”

As he did one year ago, Lawrence will be at the opening round of the series, which for the first time in over two decades will be held outside of California and instead in Houston at NRG Stadium. The new-look schedule also means Lawrence will be in 250SX East this year.

“I was set on coming out in the first coast [laughs], because I don’t think I could do any more laps,” he added. “I basically started a week after the outdoors, so I’ve been doing a lot, definitely dizzy doing practice laps and I’ve been set on the first coast for a while. I’m keen for it.”