Australian and US programs to both use Pirelli tyres in global arrangement. 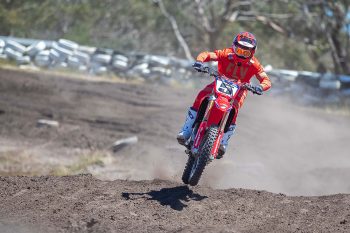 The Konsky Motorsport Group-operated Honda Racing team has switched to Pirelli tyres in both Australia and the United States, forming a global partnership for 2021.

Honda had used Bridgestone in recent seasons, in addition to Brayton winning the Australian SX1 championship on Dunlop tyres between 2017-2019, however, he did capture the 2016 crown using Pirelli tyres and has extensive experience with the brand on home soil.

“I’ve had great success with Pirelli, including my first Australian Supercross Championship in 2016, so I know I can win on them,” Brayton explained. “Pirelli are committed to racing at the highest level so we will be pushing to get them to the front this Supercross season.”

In Australia, Brett Metcalfe and new signing Kirk Gibbs will be equipped with Pirelli in the premier MX1 category on a national level, as will Honda Racing’s MX2 team entry, Kyle Webster, when ProMX commences in April.

“The team and I tested extensively ahead of making this decision and I can see why Pirelli have won so many world championships,” Gibbs said. “I am looking forward to racing with Pirelli in the all-new Australian Motocross Championship.”