Rookie Sanders claims another stage podium to climb in rankings. 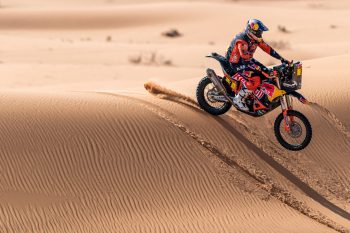 Price has won two stages this year – one and three – in what has been a navigational challenge for many, but placed strongly entering week two.

“Today they cut about 100km out of the stage and that definitely helped us because it’s still been a really tough day out there,” Price reflected. “It took a while, but I managed to catch the two guys ahead of me and luckily we were able to keep up a really good pace right at the front.

“I did have one little get-off that twisted the road book tower a little bit, but apart from that there were no problems. It feels great to have taken the overall lead, but after such an up and down week the most important thing is we’re fit and in good shape for the second half of the rally.”

KTM Factory Racing team newcomer Daniel Sanders once again claimed a top-three stage finish on Friday in third position, now ranked an impressive 12th overall and top of the rookies by over an hour.

“It was definitely a physical one today, that’s for sure, and on top of yesterday, it’s been a really tough couple of days,” Sanders said. “I tried my best to make up time today and think I did a good job. This first week has gone well, I’ve certainly learned a lot too and I’m happy with my pace – we’ve still got a long way to go.”

Follow all of the official results, live timing and detailed updates throughout the 2021 rally at the official Dakar website.