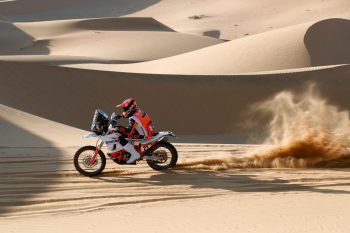 Rookie Daniel Sanders has managed a stage podium on Wednesday in his first Dakar Rally, the fourth stage of the 2021 event and on debut with KTM Factory Racing.

It was a remarkable effort for the 2019 International Six Days Enduro (ISDE) winner and multiple-time Australian champion as he continues to adapt to rally.

Sanders opened his Dakar account with third in the prologue, before a difficult opening stage saw him 25th following a penalty. He’s gradually improved since, taking ninth in stage two and eighth in stage three prior to today’s breakout result of P2, climbing to 14th overall.

“Today went really well, I didn’t have any issues for the first 100km or so and was able to close in on the front pack of riders,” recalled Sanders. “I had a strong middle section, I just kept pushing and was able to correct a couple of mistakes that the guys out front made, so that put me up on time a little.

“When we hit the dunes, I did have one big crash and got stuck on one too, luckily both myself and the bike came out fine. Towards the end I was able to push on again and apart from one little mistake things went really well. I’m really happy with third and thankfully it means I don’t have to lead out tomorrow either.”

Meanwhile, countryman Toby Price (Red Bull KTM Factory Racing) had endured a mixed start, winning stages one and three, but being ranked 28th and 22nd at the conclusion of the other days. He’s eighth in the general rankings,7m47s from the lead.

“It wasn’t a bad stage for me,” said Price. “It was a little easier than on previous days in terms of the navigation, but I managed to make a small mistake after the first checkpoint and was caught by the rider behind. I made a couple more small errors later on, which cost me a few minutes, but on the whole, it was a solid stage.”

Follow all of the official results, live timing and detailed updates throughout the 2021 rally at the official Dakar website.