It’s fair to say that with the year we’ve experienced, the 2020 MotoOnline AUS Awards have an underlying theme as a result of COVID-19, placing world sport on pause momentarily and being one of the strangest seasons on record. Still, the show eventually went on – overseas at least – and we’ve assessed the year past to name the annual awards feature winners at MotoOnline.com.au. International Rider of the Year – Eli Tomac:
Eli Tomac finally clinched the Monster Energy Supercross 450SX championship in a controlled display during the interrupted 17-round series, delivering on the promise he has shown throughout his career. With seven wins over the course of the series, it was a due result and one that has come with a sense of both elation and relief for the Monster Energy Kawasaki rider.

Off-Road Rider of the Year – Daniel Milner:
Although they only got three rounds of the Yamaha Australian Off-Road Championship in, it was evident from the outset at Toowoomba and again in Dungog that Daniel Milner was back to his best in 2020. The KTM Enduro Racing Team rider put in convincing performances to open the season, rewarded with the unofficial outright crown and another E2 title.

Rookie of the Year – Jett Lawrence:
In his first full season as a professional in the US, Australian export Jett Lawrence was both lightning quick and surprisingly mature at only 17 years of age. Sure, he missed a number of 250SX West rounds after almost winning A2 and going down, but he rebounded with a podium at SLC5 and then won Fox Raceway on his way to fourth in the 250MX points outdoors.

Personality of the Year – Jett Lawrence:
You can’t go past Jett for this one (again), purely because he has that special type of charisma that can be rare for a teenager under the type of high-pressure situation that he’s in. From his interviews to the way he connects with fans on socials, plus his new merchandise line, Team Honda HRC and Red Bull signing Lawrence just has ‘it’.

Series of the Year – Supercross/Pro Motocross/MXGP:
We’ll be honest, it was impossible to narrow this down to just one series considering the hoops that each of these organisers had to jump through in order to complete these championships. With COVID placing the world on pause, Supercross being one of the first to get going again, Pro Motocross defying the odds to actually begin and MXGP coming together, we’re thankful for everything!

Most Anticipated Motocross Model – 2021 Honda CRF450R:
Ever since Team HRC’s Tim Gajser and Mitch Evans debuted this year’s CRF450RW (aka works model) in MXGP, there has been a lot of excitement based upon the 2021 CRF450R. As expected, Honda launched an all-new 450 for 2021 and even though reviews have been mixed so far, you can’t deny that the interest has been huge and its appearance is next level.

Most Anticipated Enduro Model – 2021 GasGas EC range:
Since KTM Group took ownership of GasGas, we’ve all been anticipating the new line of red machinery – both enduro and motocross. Positioned as more of a base-model brand priced beneath KTM and the more premium Husqvarnas, the actual platform is vastly similar, only with less features. There are also less variants, being a EC 250, EC 300, EC 250F and EC 350F only.

Top Team – Penrite Honda Racing:
This one has an Australian twist to it, of course, but how good was it to see the Konsky Motorsport-operated Penrite Honda Racing team enter 250SX West in Supercross with Luke Clout and Mitchell Oldenburg this season? Moving forward, Justin Brayton will lead a new 450SX program, a new title sponsor will be in and, unfortunately, Clout has come home. But still, what a milestone!

Best Event – Anaheim 1 Supercross:
The opening round of Supercross at Anaheim is always a showstopper and this year it was a particularly special one for MotoOnline since we expanded our global footprint with our US website at MotoOnline.com. After operating the AU version for over a decade, to go live on the press day of A1 direct from Angel Stadium was remarkable and it was also one of the few normal races pre-COVID. 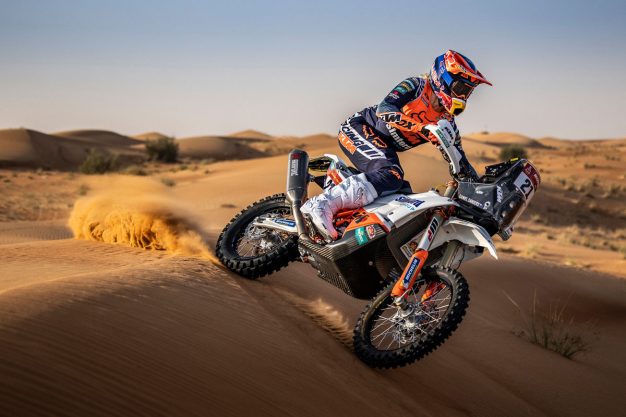 Hottest Topic – Racing on hold:
Speaking of the pandemic, to have racing put on hold internationally in March when the seriousness of coronavirus became apparent was a massive shock to the system. We’ve all seen how things played out from there and, thankfully, the sport did go on (albeit not here in Australia), so kudos to all who worked tirelessly to make that happen under such uncertain circumstances.

Greatest Disappointment – Australian cancellations:
It’s frightening to consider that we haven’t had an Australian motocross or supercross race at the national level since last year’s AUS-X Open, especially since so many championships did manage to get up and running again overseas. Border closures and restrictions made it impossible locally, which was immensely disappointing, but it’s safe to say that we’re already primed for 2021.

Most Surprising Moment – Daniel Sanders goes Dakar:
COVID strikes, Australian racing including the off-road championship is paused, KTM Group Australia benches its factory teams for the rest of the year and, all of a sudden, Husqvarna Enduro Racing Team leader Daniel Sanders becomes KTM Factory Racing rally rider and is in Europe training for his Dakar debut alongside countryman Toby Price. Who would have thought!?

Social Standout – Todd Waters:
Not only is Todd Waters the reigning Australian MX1 champion, but as an ambassador of Husqvarna and association with a whole list of commercial partners, his understanding of valuable content is the best in the business from a rider’s standpoint here in Australia. Waters mixes in a good balance of pro-level video and photo, but still offers a lot of less formal BTS access for his fans.

Special Mention – WEM chapter ends:
Williams Event Management (WEM) had been at the helm of the Australian Motocross Championship since 1997, but following 23 years the Williams family called time on their leadership a season sooner than originally planned. It’s been a heck of a run outdoors, however, it’s expected WEM will still be involved in Australian Supercross from in its motorsport management role.