Metcalfe, Gibbs and Webster to headline Victorian event this weekend. 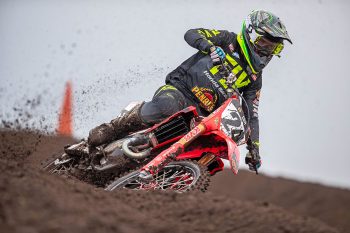 This weekend’s AMX MXOpen event is shaping up to be one of the largest Australian motocross events of the year on Sunday at Wonthaggi, Victoria, attracting over 200 entries as racers look to get back behind the start-gates in 2020.

“I still didn’t believe we would be crossing borders this year, so it’s awesome to be racing,” Metcalfe commented. “I am from South Australia, Kirk Gibbs is from Queensland and riders are coming from all parts of Australia. This is the one and only event of its kind this year and I am excited to race.”

CDR Yamaha Monster Energy owner Craig Dack said: “Yamaha and Honda have been going at one another since their inception and this weekend will be no different. They are both competitive brands and neither of us like to lose. The is my 27th year with Yamaha and racing is racing – nothing changes.

“As competitors we thrive on competition and racing fuels my passion, but nothing is more satisfying than beating Honda and that has been the same for as long as I can remember. This weekend is important to the industry it stimulates participation.”

The Dandenong Motocross Club, which will also host April’s 2021 ProMX opening round, is recognised as one of the nation’s leading venues and there will be a mixture of talent in action including MX1, MX2, Womens, Veterans and an assortment of regular junior divisions. There will be bikes on display, product displays and merchandising.

Tickets can be purchased online via Eventbrite or at the gate, $25 for adults or $15 for children (aged 15 and under). An official AMX MXOpen Event Program is also available online now, detailing the schedule, rider entries and categories, with $15,000 in prize money on offer.