Queensland-based operation to focus on local support and initiatives in 2021. 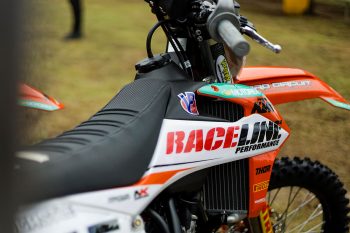 Raceline Performance has announced that it has placed its professional motocross and supercross team on hold for 2021 after implementing a new direction for the organisation and mutually agreeing to part ways with KTM Australia.

A staple in the sport at a national level, Raceline has operated KTM’s outsourced factory team since last year – also operating the official MXD program before that – and has had a rich history under the ownership of John Tisdale.

After signing three-time national MX1 champion Dean Ferris for this season and the Australian Motocross Championship being cancelled due to the coronavirus pandemic, the serious back injury of Ferris and split from KTM will see Raceline Performance instead focus upon its workshop business in addition to state-level and club initiatives. The Queensland-based company will also still provide race bike lease and rider support programs nationally.

“Firstly, I would like to thank KTM Australia for their support and valued partnership with Raceline Performance over the last five seasons,” commented Kevin Williams, head of Raceline Performance business development. “It has been a pleasure to work with them and we wish KTM all the best in their future endeavours. In regards to Raceline Performance not fielding a professional racing team in 2021, there are many factors that have influenced this decision.

“Raceline Performance was founded by John Tisdale in the early 2000s as a junior support program with the goal of providing young riders with both equipment and infrastructure to help take their riding to the professional level. Evolving into a MXD support program and eventually a factory team over the past 12 years has been an incredible journey and we have helped many young riders and their families achieve their racing dreams.

“The Raceline Performance racing organisation has fielded international stars and national champions en route to professional motocross and supercross victories in all classes of professional competition. In order to facilitate this elite level of racing, the Raceline Performance workshop has been expanded and refined to a business structure where we have our workshop based in Burleigh Heads, QLD, along with an import and distribution program for performance products with brands such as Pro Circuit.

“The signing of Dean Ferris for the 2020 season after a successful appearance for the team in 2019 winning at the Murray Bridge round of the MX Nationals has been a huge success for our program as a whole. This is a relationship that will continue into the future with Dean as an ambassador for the Raceline Performance program, mentoring our junior riders via his Motocross Masterclass coaching, developing our products and representing the brand to the highest of levels.

“Dean being sidelined for 12 months with his back injury has played a role in Raceline not competing in the 2021 season and we are happy to reevaluate our position on professional competition as a team when Dean is willing and able to return to racing. In the current global climate during the COVID-19 pandemic and the instability around national competition, we feel it is best for us to focus on our growing performance workshop and distribution programs.

“Raceline Performance will also be returning to our roots with helping to develop the next generation of junior talent via our local level racing support and club activations. We will still be involved with racing at a national level via our race bike lease and rider support programs and we look forward to providing more details in the coming weeks on our 2021 initiatives, including local and state level club and event partnerships.”

KTM Group Australia is yet to confirm its plans for 2021, however, it has most recently been broadly speculated to be considering an in-house program for the first time since 2018 when the KTM Motocross Racing Team was closed in favour of partnering with Raceline. Factory KTM and Husqvarna enduro teams have been operated internally throughout that period with significant ongoing success.