Full 20-round schedule revealed in addition to September MXoN event. 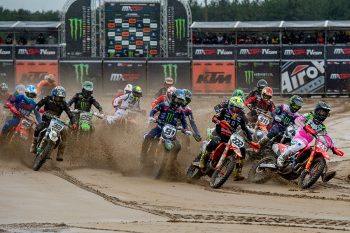 A provisional 2021 MXGP World Championship calendar has been announced by Infront Moto Racing, confirming a 20-round schedule that will aim to reintroduce flyaway events.

Next season will begin at the beginning of April, however, organisers are prepared to adapt the schedule if coronavirus restrictions aren’t eased.

Four new venues will debut, including Muscat in Oman for the opener, Oss in the Netherlands, Itti-KymiRing in Finland – originally due to host its first event this season – and also Russia’s Igora Drive.

The season will begin on 3 April with the MXGP of Oman, before heading back to Europe for the MXGP of Italy, followed by the MXGP of Portugal, Netherlands, Germany, Russia and Latvia. From there, the series will hold two rounds in Indonesia, before returning to Czech Republic, Belgium, Sweden and Finland.

Towards the end of August, MXGP will return to Russia for the MXGP of Igora Drive, followed by Turkey, China, France, Spain and ending at Patagonia Argentina. The circuits in Italy and China are TBA, as is round 19 altogether.

Following a year’s hiatus, the Monster Energy Motocross of Nations (MXoN) is scheduled for 26 September at the famous Imola circuit in Italy, which is prior to the final four MXGP rounds of 2021.