Victorian Bailey Malkiewicz has just completed his rookie year in the largely-disrupted MX2 World Championship and, considering he’s ridden the entire year with a torn ACL, the 19-year-old managed to hold his own. The Team Honda 114 Motorsports racer finished the year in 14th overall and we threw Five Questions at him as soon as the final chequered flag fell on season 2020. How are you feeling, having finished your first year in the MX2 World Championship?

Pretty good for the most part. Before the season started I arranged a goal with the team manager to get consistent top 15s and I feel we accomplished that at most of the rounds when I wasn’t on the ground or experiencing other issues. I ended up 14th in my first MX2 championship, so that was pretty good. Everyone was happy, but when my results started to improve towards the end of the season they wanted more and more from me. I finished 11th at three rounds, but I think my best was at Mantova where I finished seventh in the first race before I crashed a couple of times in the second moto. Looking back, I think the first few rounds back at Latvia were the toughest – I wasn’t up to par with everyone else after the long mid-season break and I was nowhere near where I needed to be fitness-wise. Once I got more racing in, my results improved.

When did you snap your ACL?

I did it at my first pre-season race at Ottobiano, Italy. On the first lap of the first race a rider went down in front of me and I hit him, went off the track and did my ACL. It was a shit start to the year and put a big stopper on what I could do in the MXGP. My confidence was really low and I was trying to train and ride, not knowing what was wrong with it. I came back home to Australia during the mid-season break and got it checked out. They said my ACL was torn and other stuff, so at least I then knew what was wrong and we could do a lot of work on my knee to get me through the racing, which helped a lot.

Why did you decide to keep racing, rather than have an operation?

A couple of days before the first round we were tossing up whether I should ride, but if I didn’t, it would make things a lot harder for my career and at that stage we didn’t know what was wrong with it. I got a good result at the second round at Valkenswaard, considering my knee and the wet sand track, and once we started we couldn’t really stop! I looked into getting it fixed back in Australia, but I would’ve only done two MXGPs with average results. I had to come back and fight through the pain to get some better results to set myself up better for next year. Getting an operation would’ve been the better option, but I didn’t have a deal arranged for next year, so I had to do what I had to do. 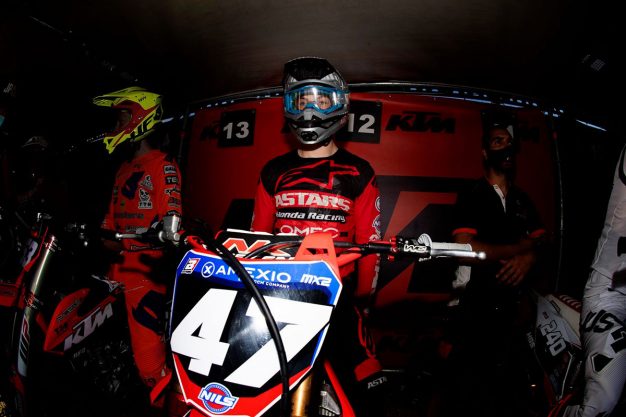 Where do you think you’ve improved the most over the course of the year?

I think the biggest thing I’ve learnt is that racing is your life over here. In Australia racing is more something you do on weekends, but in Europe, if you don’t put your all into it, you won’t get anything out of it. On the track, getting good starts and good qualifying results at the last three rounds meant I could spend a bit of time at the front of the field. I learnt a lot from those experiences and it has made me a better rider.

What are your plans for next year?

At this stage I don’t have anything signed, but I’m hoping something will be sorted out shortly. The team I’m with already has two riders lined up for next year, but the reality is, as an Australian with no ‘home base’ set up here in Europe, I need money to live for the year. I’m looking for a contract that includes some financial assistance. I still have four more years in MX2 and 10 of the current riders have to jump up to the 450s next year, so I’m confident my results will improve a lot over the next year or two. In the meantime I want to sort something for my knee ASAP so that it’s ready before the 2021 championship begins in April. I’m also planning on coming home and for Christmas, spending time with my friends and family, and hanging out with my dog.