Enhanced Australian Supercross Championship in the works for 2021 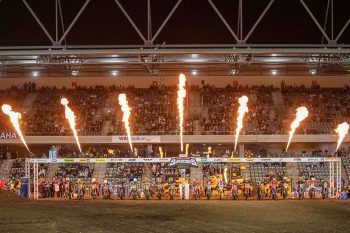 The Australian Supercross Championship will be enhanced from 2021 by series commercial rights-holders AUS SX Holdings in a bid to solidify the sport, which could see the AUS-X Open organisers promote multiple rounds on the calendar.

Since becoming involved in 2018, AUS SX Holdings has taken an arms-length approach in the series operation while utilising an assortment of individual promoters, but will elevate that involvement from next season.

Last year, Troy Bayliss Events hosted the Brisbane, Gillman and Wollongong rounds before the S-X Open International FIM Oceania Supercross Championship events in Auckland and Melbourne completed the calendar. However, from 2021, expect AUS SX Holdings to promote at least one round internally and will potentially partner with incoming event promoters for additional rounds.

“We’re definitely looking at it, whether we expand the amount of events that we run, although there will still be only one AUS-X Open event,” confirmed AUS SX Holdings co-founder Adam Bailey. “If there’s the potential for another Australian championship round or more, we’re evaluating that.

“The plan is five rounds in total for next year. That seems to be the general consensus within the industry – the manufacturers and brands – that they’d rather have five good ones than stretch to more than that until we can. That gives us the platform to build from and hopefully it might grow further again in 2022.”

AME Management, which is the operated by the same team behind AUS SX Holdings and the AUS-X Open, will takeover the commercial and sponsorship elements of the entire championship, which will add integral consistencies and opportunities across all rounds. The series will be rebranded altogether as part of this broad overhaul off the back of the 2020 series’ cancellation.

“Since we bought the rights to the series from MA, it’s been a staged approach,” Bailey explained. “When we first got involved, we were very gently involved, because we didn’t want to make any drastic changes, but slowly over time we are becoming more integrated, giving it more time and also focus.

“Last year we were more heavily involved in the background, which highlighted some areas that needed even more attention. AUS-X Open at Marvel Stadium had been such a huge focus for us, but now that we’ve been through that and done it, we can now ensure the rest of the series continues to move forward and grow as well.

“The next stage is for us to completely rebrand the series, which we had planned for this year, but it will obviously now roll out next year. All sponsorship elements will be managed internally by us, which allows us to have a consistent message across the whole series, to ensure that the delivery of sponsorship is done properly and that’s such a crucial, super-important area.

“That’s what we do full-time at AME Management – that’s our specialty in a lot of ways. For us to be able to bring that in-house, it will help other promoters, but will also help us attract new promoters that may not have experience or contacts in the motorcycle industry. A concert promoter, for example, could get involved in Supercross not having to handle any of those elements.”

A post-produced television broadcast is being targeted for all rounds in addition to the live AUS-X Open event in Melbourne, while AME Management will also continue to produce its behind the scenes ‘Supercross Life’ program in order to further showcase the personalities of the sport, according to Bailey.

“We obviously need to make sure that we will have the commercial support, which we have already started working on, but that’s definitely the goal to have a post-produced TV package for the whole series,” he added. “That will include at least Fox Sports and Kayo, perhaps a free-to-air network as well, to increase exposure for the series and value for the sponsors so we can lift the sport.

“Supercross Life is our behind the scenes series away from the racetrack, which we definitely want to do because we feel that’s the best style of content to show who the athletes are and get non-hardcore fans engaged with who our riders are. Unless they really know their stories and what goes on behind the scenes, it’s really hard to expect them to become true fans, so that will be in addition to the highlights packages.”