Team HRC’s Mitch Evans has experienced more than his fair share of highs and lows this year. A breakout third in his first-ever MXGP moto at Matterley Basin started his factory Honda campaign on a strong note, but since then he’s battled through the COVID disruptions, shoulder surgery and now a broken wrist, just as his form and pace began to turn a corner. MotoOnline had a Conversation with the 23-year-old to reflect upon his season. So, Mitch, you’re currently rehabbing a broken wrist. What happened?

It happened in the first moto at Spain, after I’d qualified third-fastest. Early in the race I misjudged a jump and overjumped, landed hard. Both my hands blew off the bars and I felt my wrist snap, then, when I bailed, I landed on a rock and broke a rib. It was difficult with the language barrier, as they originally told me I’d broken six ribs… I was like, ‘I don’t think it hurts that much and I can still breathe okay’. We had another X-ray yesterday and they told me it was actually the sixth rib that I’d broken, which made more sense!

Pretty good. I broke the radius horizontally and it shattered into a lot of little pieces that the surgeon had to remove. They’ve put a plate and 10 screws in to hold it all together and I talked them into giving me a splint instead of a cast, so I can take it off and shower normally eventually. At the moment that’s still not possible with the cut and staples, but it gives me a bit more freedom, when it comes to sleeping and stuff. The recovery time is six-to-eight weeks. I could’ve returned to racing after three weeks, but this year there’s no point – in a normal season three weeks off would mean you’d miss three GPs, but this year, I would’ve missed seven or eight races, so my season’s over and I can take the time to get both my wrist and shoulder back to 100 percent. There are a few positives to come out of it all.

Is your shoulder still giving you a bit of grief then?

Not so much grief, but the range of motion isn’t quite back to 100 percent and it’s still weaker than my left-hand side. That’s why I was struggling when the series recommenced in Latvia a couple months ago. My cardio was good, but 10-15 minutes into the motos I’d have no strength left in my arms. It was so frustrating as I wasn’t breathing hard, but I wasn’t able to push any harder.

Surely with an injury so late in the season, you normally would’ve bought a plane ticket home. Why are you still in Europe?

I have the team here and can do physio on my wrist every day, which I’ve done since the one-week mark. It’s best to stay here and do that, because if I returned home I’d have to sit in quarantine for two weeks and I’d miss out on a lot of that really important physio. Unless the restrictions change – which I doubt they will before Christmas – I plan to stay here. In December, the plan is to move from Milan where the team is based to southwest France, where there’re a lot better tracks close by and more places to cycle, run and what-not.

Looking back on the year, what was the highlight and lowlight for you?

I’d say the highlight was the very first moto of the year at Matterley Basin, when I got third right out of the gate. The lowlight was definitely this wrist injury, because I was just feeling like I was coming back to the front and really at a point where I could challenge for more podium positions. I was really bummed I didn’t get to achieve that goal, as I felt like I would’ve got it done that weekend in Spain when I crashed. It was a tough pill to swallow, but I’ve accepted it now. I’ve come back once from the shoulder injury, so I can do it again. 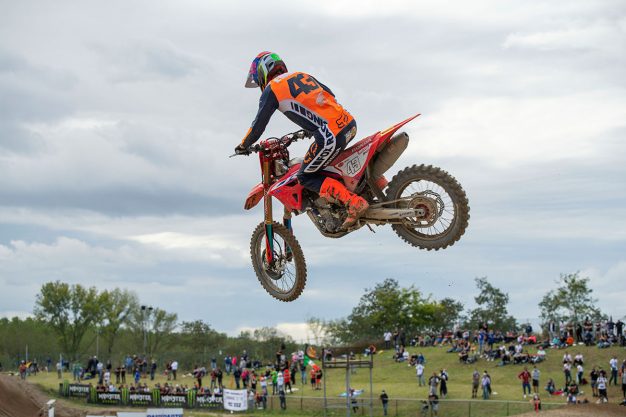 Obviously your pace and fitness is right up there and you’ve proved that a number of times this year. Being your first year in MXGP, how much of breaking through for those podiums again is a mental thing, rather than a physical thing?

Oh, the psychological side is huge. I had a really strong off-season and did a bit of riding with my teammate Tim [Gajser], so I knew where I was pace-wise and that gave me the confidence and mindset that I can be up the front. As a result, I started the championship really strongly. After the COVID break, I wasn’t confident in my preparation. I’d only been back on the bike for two weeks and it took a while to find that mindset again, that I could be a podium guy. At the first rounds at Mantova and Faenza I didn’t have the right mindset, but, for the next two rounds at both of those stops, I believed in myself and my results showed that.

You’ve re-signed with Team HRC for next year, alongside Tim Gajser again. It must be a comforting to know you’ve got something already locked in for 2021.

For sure. Right from the start of the season when I placed third in that opening race, the team was keen to keep me, as they’ve seen how hard I work and they saw what I’m capable of as the year went on. Tim and I don’t really feel like team-mates – we get along so well it’s more like a friendship. People in the team have told me that Tim hasn’t got on this well with any other team-mate, we joke a round a lot and look out for each other on the track, so the atmosphere in the team is really good. The only real barrier is my Australian accent… they reckon they can understand Dutch or German-accented English a lot easier than mine, as I always cut off my words or speak too fast for them.

That’s awesome. No doubt you would’ve seen the news that Jorge Prado has tested positive for COVID. That must make things a bit more real for you guys.

Definitely, but it’s kinda surprised me that we’ve managed to get in so many rounds before someone tested positive. He’s the first rider to do so and I think it’s a reality check that everyone, including us as professional athletes, can get it too. In his interview on Wednesday, Jorge said he had trouble breathing during the racing as he was sick, but he still won, so it mustn’t have affected him too much.

Any idea what 2021 will look like for the MXGP championship?

Not yet, but hopefully we’ll get a calendar next week so we can make a plan. Normally by August we have a pretty good idea what the next year will look like, but right now we haven’t heard much at all. Will we have three rounds in a week like we’ve done this year, or will it be back to how it was? Who knows. For now I’ll just focus on physio and getting my body back to 100 percent, then get into my winter training and prepare for whatever next year throws at us.