MX2 championship leader Vialle does it again with another round win. 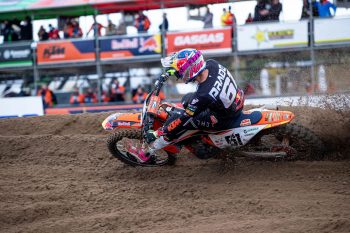 Red Bull KTM duo Jorge Prado and Tom Vialle have delivered double class victories in the MXGP of Limburg, the second of three-straight rounds at Lommel.

Prado went 2-1 for the overall in MXGP, his third of the 2020 season, ahead of world champion Tim Gajser (Team HRC) and Antonio Cairoli (Red Bull KTM).

Gajser charged to the opening moto win, however a mistake while leading the second encounter enabled Prado to take victory after keeping teammate Cairoli at bay. Gajser recovered to third and salvaged a podium overall.

In the world championship standings, Gajser now has a 55-point advantage over Cairoli and is on target for a third premier class crown, while Prado has now climbed to third overall, just two points from Cairoli. 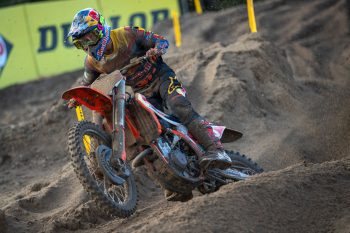 The MX2 class was once again topped by championship leader Vialle, who went 2-1 for his seventh overall of the 2020 season.

Vialle was joined on the podium by Ben Watson (Monster Energy Yamaha) and his teammate Jago Geerts, winner of the opening race on Wednesday.

Australian Jed Beaton (Rockstar Energy Husqvarna) was ninth overall in round 14 of the season after finishing 10th in both motos, while countryman Bailey Malkiewicz (Team Honda 114 Motorsports) went 14-19 for 15th overall.

It’s Vialle who is the runaway leader of the championship, a comfortable 61 points clear of Geerts entering Lommel 3 this Sunday, 25 October. 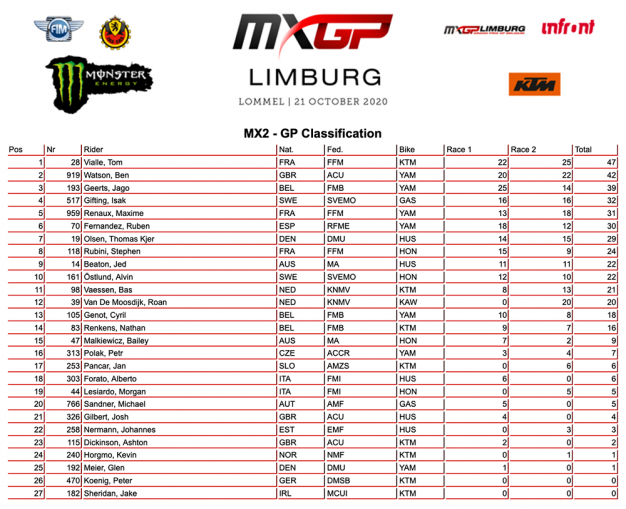